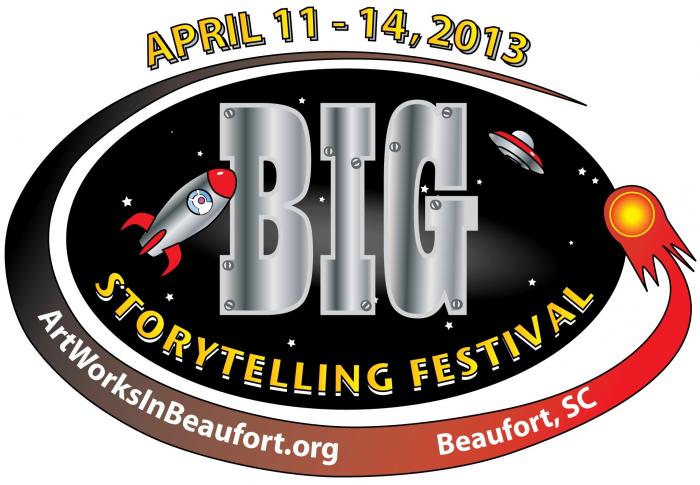 7:43 pm on Wednesday April 3, 2013 | Posted by ArtSeenSC
Words from the Wise: the BIG Storytellers speak

Four nationally-touring storytellers are performing in Beaufort, April 11-14, at the BIG Story Fest at ARTworks. Natalie Daise is the hometown favorite, performing in the Patchwork presentation on opening night; then in “Story through Rap, Hip-Hop & Spoken Word: the Oral Tradition Transformed”; in concert, with Lashanta Ase opening; in the free family activites on Saturday the 13th; and in “Storytelling in the Digital Age.”

They all have tales prepared for you:

The Nature in Human Nature~ storyteller Doug Elliott is from North Carolina: “I am interested in medicinal plants. I wrote a book entitled Roots, about the underground portions of plants. I was astounded to learn about Root Doctors  in the Lowcountry—High Sherriff McTeer was the sherriff of Beaufort County for many decades who learned hoodoo root magic from the famous Dr Buzzard, an African American root doctor. By the time I started visiting McTeer in the ‘70’s he was a dignified elderly gentleman regularly performing hoodoo rituals and healing ceremonies to break spells and hexes on hundreds of clients in the back room of his office on West Street in Beaufort. I witnessed some of the most extraordinary healing I had ever seen. I don’t get to tell this story very often because it is so tied into place. This is one of the reasons I’m excited to come to tell stories in Beaufort.”

All Beginnings are Difficult~ storyteller Judy Sima is from Michigan: “I’ve worked on “My Mother’s Voice” since I started storytelling in the 1980s, since I discovered personal stories. It took me a long while to put her voice in a form that I could wrap my mouth around and tell: her escape from Germany in World War II. She was in the last group of jews to leave before the Americans entered, in 1941. She'd be 101 this year. It's a cathartic kind of story, and other people find it hopeful— they made it through, they made it to America. She was a seamstress, making her own clothes and hats. When she arrived, a relative said you look like a greenhorn, so she never wore her own hats again. She wanted to look like an American.”

He’s Judging the Liars Competition~ storyteller Bil Lepp is the five-time Liars Champ from West Virginia: “I give Mark Twain's advice: You have to tell it like you don't understand why anyone else would think what you are saying is funny. That's not an exact quote, but it is close. And my own advice: Know your story and have confidence in it.”

“The humorous story is told gravely; the teller does his best to conceal the fact that he even dimly suspects that there is anything funny about it.”— Mark Twain

Want to put this advice to test? The wildcard round is Saturday, April 13, prepare your story, true or not, original or re-told, 3 to 5 minutes long.

The BIG Story Fest is a project of ARTworks, the arts council of Beaufort, Port Royal and the Sea Islands: 843-379-2787, @artseensc, artworksinbeaufort.org.

Head to the source at beaufortcountyarts.com
Advertisement