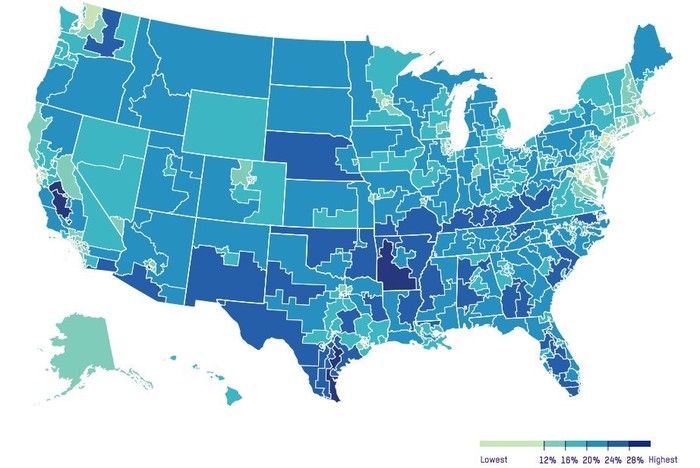 via HuffPo
3:36 pm on Wednesday June 11, 2014 | Posted by Rocky
Most of coastal SC has state's highest concentration of low wage workers

A study by Oxfam America, a global organization working to right the wrongs of poverty, hunger, and injustice, is highlighting the countries many pockets of where low wage workers live. And unsurprisingly, the south is one of the biggest areas for low wage workers.

"The map above, from Oxfam's report, "Working Poor In America," breaks the U.S. into congressional districts and analyzes the percentage of workers in each district who would benefit from raising the minimum wage to $10.10 from its current $7.25 an hour, as President Barack Obama has proposed. On average, 19 percent of workers fall in this category. "

What does the OxfamAmerica.org study specifically say about South Carolina?

"The states with the highest percentages of low-wage workers are in the South, led by Arkansas and Mississippi, and including Oklahoma, West Virginia, Florida, South Carolina, and Kentucky. Several Western states also make the list, including South Dakota, Idaho, and Montana. None of these states has a law setting a minimum wage above $7.25. Most of the states with the lowest percentage of workers impacted had state laws setting a higher minimum wage than $7.25."

South Carolina is in the top ten of the nation's low wage workers, we fall in at number 9, nestled between Montana and Kentucky. If the federal minimum wage is raised to the proposed $10.10 an hour this would effect 22.3% of South Carolina workers, helping to move them out of poverty.