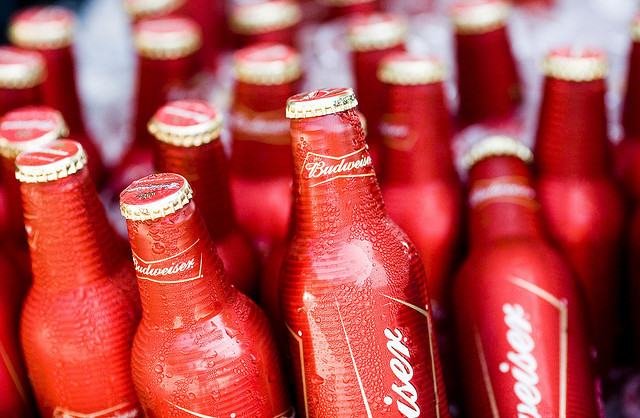 Flickr user: thomashawk
9:00 am on Friday May 23, 2014 | Posted by Rocky | References FoodRepublic.com
Not a Bud of new SC Beer legislation: Anheuser-Busch fighting against proposed "Brewpub Bill"

Budweiser maker Anheuser-Busch isn't a fan of the progress being made for new beer laws in South Carolina. Thanks to Myrtle Beach's push to get Stone Brewing Company to make us and or South Carolina their East Coast home some real movement has happened in Columbia to update and change the state's brewery laws.

The new bill basically makes it so brewpubs and breweries can be one in the same -setting up a restaurant to sell the beer brewed. Currently, South Carolina law keeps on-premise consumption for breweries, only offering growlers for purchase and off site drinking, and brewpub's now can only produce 2,000 barrels per year. The law would up that number to 500,000 barrels per year for brewpubs. (Read more about the bill over at The Sun News)

According to FoodRepublic.com all was goig well with the bill, passing the house with-a-quickness, but Anheuser-Busch's lawers have swooped in:

[Anheuser-Busch] doesn’t hold anything back, advising that they have “some serious concerns about one of the amendments added by the House which is intended to make SC a more amenable environment for craft brewers, in particular Stone Brewing Company.” More specifically, they imply the new legislation would be detrimental to the current three-tier system for alcohol distribution — instead of brewery to distributor to storefront, the amended law would effectively eliminate the middleman. The letter even goes as far to say “Anheuser-Busch's belief is that everyone should play by the same rules,” and brings to light that Stone would need 400 employees to make 500,000 barrels when a local AB plant needs just 250 employees to produce 8.5 million.

This of course is about "fairness" and not out of fear of small breweries taking a percentage of their sales. Hop on over to Food Republic for their full write-up. Read the letter sent from Anheuser-Busch and obtained by SCBeerJobs.com.

A better state of affairs would be to dismantle the three tier system, but no one is willing to uproot that poison ivy.

Anyone who believes that the current system is fairer than what this bill proposes or that AB is truly threatened by this bill is misinformed. Craft breweries will actually help create a larger market of consumers who, from time to time, will buy AB products. Please support this bill and bring us into the 21st century!