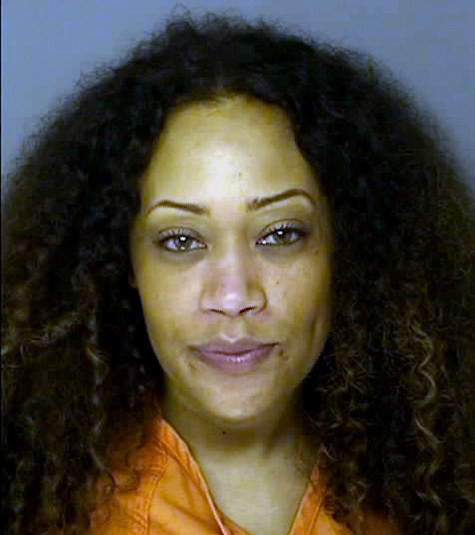 As you no doubt heard by now, former Destiny's Child member, Farrah Franklin, was arrested in Horry County.

"Horry County Police were dispatched to the 2000 block of Chattooga Ct. For a call for a disorderly person. She was with other people who told police she had been drinking, acting strange, yelling, and slamming doors. Franklin reportedly fled from the house when she heard police were called. She reportedly ran to the neighbor's yard where police found her laying down."

But what you might not have heard is the whole story, we can thank the DailyMail and TMZ for that:

"On Monday new details emerged of the incident: the beauty had been partying with football players Ricky Sapp and Da'Quan Bowers before being found laying in a stranger's front yard."

"When police came to the scene she told them she wanted to sleep in the woods.

Police told TMZ that Bowers flew the singer to Myrtle Beach where they went out 'day and night,' enjoying cocktails. When they all went back to Sapp's residence, Farrah was apparently intoxicated.

Sapp and Bowers both told police they thought Franklin 'had been doing drugs,' according to the site, because she often visited the bathroom for long periods of time."

Farrah was only in Destiny's Child for five months, and in 2011 she was arrested in Los Angeles for disorderly conduct as well, and that time alcohol was also a factor.

Below is Farrah during her 15 minutes of fame...

A great website with interesting and unique material what else would you need. 0800 call forwarding

Police told TMZ that Bowers flew the artist to Myrtle Beach where they went out 'day and night,' appreciating mixed drinks. When they all did a reversal to Sapp's living arrangement, Farrah was clearly inebriated. 0800 call forwarding

Thanks for ones marveloosting! I genuinely enjoyed reading it,you are a great author. I will be sure to bookmark your blog and may come back very soon. I want to encourage you to definitely continue your great job, have a nice weekend.
Hotels Near Dubai Mall Burj Khalifa

Amzaing Article!!! Iam Interesting... I will Comeback next time to read your post...wisatasolo.id

As a Newbie, I am permanently exploring online for articles that can be of assistance to me. I will definitely dig it and personally recommend to my friends. Best Hotel Reviews

I am confident they will be benefited from this site. Thank you. Asian Hotel Reviews

arrested for partying? so sad

You have published article about "Ex Destiny's Child member arrested in Horry Co. after partying with NFL stars"with superb!!!, I truly think this website needs much more consideration. I’ll probably be again to read much more, thanks for that info http://www.memefloristjakarta.com/

You have published article about "Ex Destiny's Child member arrested in Horry Co. after partying with NFL stars"with superb!!!, I truly think this website needs much more consideration. I’ll probably be again to read much more, thanks for that info http://www.memefloristjakarta.com/

Keep up your great work , I read this articles on your site about "Ex Destiny's Child member arrested in Horry Co. after partying with NFL stars" and I think that your blog are very interesting and useful for many people. http://www.memefloristsolo.com/

Thank you for your post about Ex Destiny's Child member arrested in Horry Co. after partying with NFL stars. I really appreciate you taking your time to think about it. http://stekom.ac.id/

Well… your post was very sophisticated. Just keep updating much useful information so the reader like me would come back again and again. Rangkaian Bunga

This is the first time I am visiting this site and I don’t know much about this site. I have watched Destinys child official video provided here and it is superb. Please provide the details of the actress in it. Keep sharing more and more articles like this. Cleaning Services San Jose

There is always a party which leads to trouble in the end, so always take precautions whom you party with. Amazon Super Value Day Always.

It’s disturbing to hear about how such pop stars engages in disorderly conduct by indulging in alcohol and drugs. This brings to light their personal lives which they hide from the public under a false persona. This article posted has truly covered all the details of the case and keep up the good work. directv

Incredible post. I am expecting more of it in future Free Recharge Tricks

There are many useful points and information in your article. Thanks for informing us. Freecharge promo code