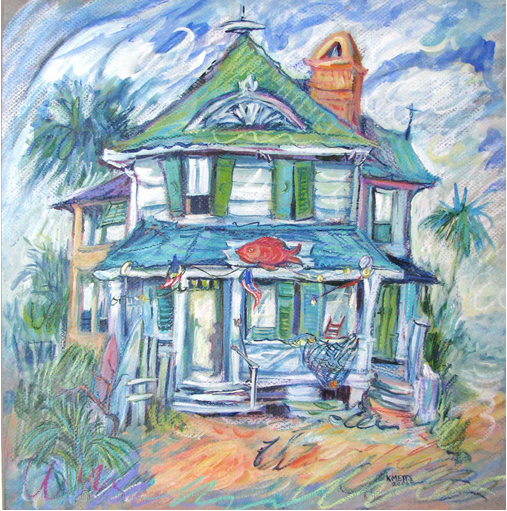 The Pawleys Island Festival of Music and Art has the announced the recipients of the Kathryn Bryan Metts Visual Arts Scholarships.

Joshua Knight, a native of Hamer, South Carolina and a rising senior at Coastal Carolina University, and Cymry Flood of Burlington, North Carolina, a rising junior at Elon University, were awarded scholarships in the amounts of $2,000 and $1,000, respectively. Both Knight and Flood are majoring in Fine Arts.

The Kathryn Bryan Metts Scholarship, founded in 2010 and presented annually, is available to upper-level (junior, senior or graduate) students who are a native or current resident of Georgetown County, SC or Alamance County, NC, and who are specializing in painting and/or drawing at a post-secondary institution.

The scholarship honors the much loved and widely collected artist, Kathy Metts, a Georgetown resident and UNC graduate, whose love of the Lowcountry was often reflected in her colorful paintings of Pawleys Island and Brookgreen Gardens.

“Kathy’s paintings reflect her exceptional talent, her sense of whimsy, and her excitement for life and family,” said Festival Director, Delores Blount. In 2010, the Festival opened with a show at the Cheryl Newby Gallery showcasing the original works of the dedicated artist whose abbreviated life and career ended in 2006 following a bout with cancer.

The Pawleys Island Festival of Music & Art, widely acclaimed as one of the Southeast’s leading music and arts festivals, is recognized as an advocate for promoting the arts among youth.  The Kathryn Bryan Metts Visual Arts Scholarship represents the first scholarship that the Festival has ever endorsed.