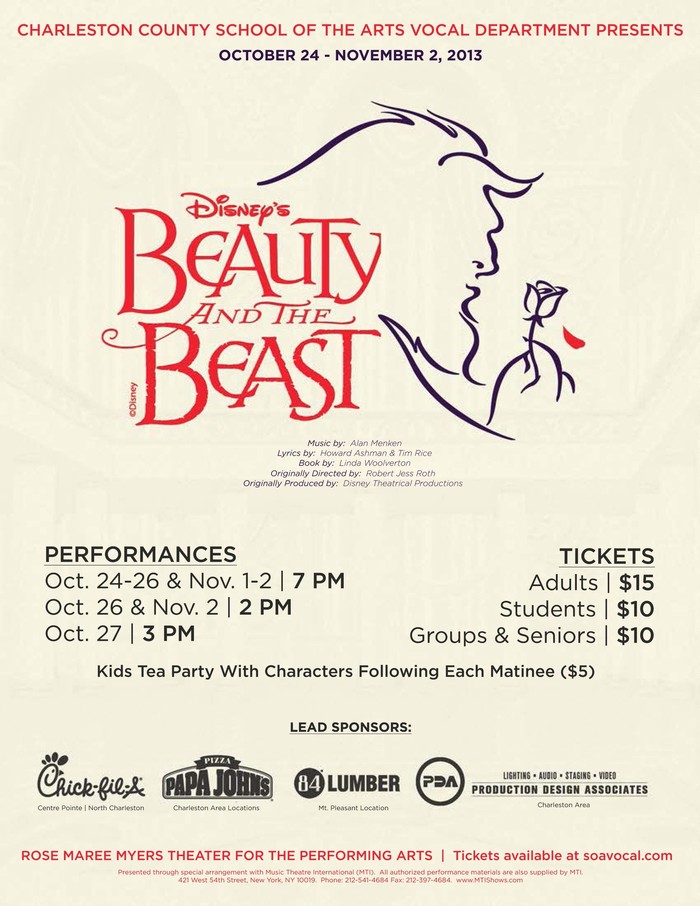 It’s a “tale as old as time” in this classic fairytale…in a French provincial town, the lovely Belle (played by Abigail Floyd) rebuffing the advances of egotistical Gaston (Ethan Courville) finds herself prisoner in an enchanted castle and learns to love the cold-hearted Beast (Jess Rames).

Inspired by the 1991 animated Disney film, this show packed New York audiences for 14 years and is the 8th longest running Broadway show. The musical has grossed more than $1.4 billion worldwide and played in thirteen countries and 115 cities. The Charleston County School of the Arts Vocal Department of 200 middle and high school students presents their production with colorful costumes, a phenomenal set, and songs that you’ll be humming long after the curtains close.

“Following the tremendous success of last year’s Les Misérables, a completely sung-through operetta, is daunting but I believe this show will do it," says director Heather Hammond. “With crowd-pleasing songs like Beauty and the Beast, Gaston, Be Our Guest and Belle, this show will appeal to people of all ages.”

Under the direction of Heather B. Hammond and Robin A. Rogers, among the large cast is the heartwarming enchanted characters, Victor Swatzyna as Lumiere, Madelyn Knight as Mrs. Potts, Parrish Brown as Cogsworth, Natalie Sinclair as Chip, and the comical Devon Nalley as Gaston’s sidekick, Lefou.

Head to the source at breastreconstructionnetwork.com
Advertisement