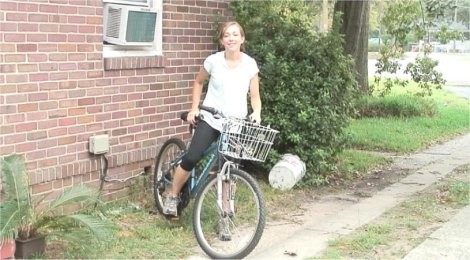 Nikki Seibert, 25, lives on Savannah Highway -- one of Charleston's busiest roads for traffic. And yet she stands out as an anomaly against your average American -- for she does not own a car.

Originally from Raleigh, N.C., Nikki is a keen local environmentalist, and she swapped out from four wheels to two three months ago, when the spiralling cost of gas and upkeep for her car finally made her take the plunge to dive into an automobile free world. But it hasn't exactly been a smooth ride for her. Nikki Seibert explains:
It's not been an easy process, getting caught in the rain on the way to an important meeting and then trying to get people to take you seriously when you're soaking wet has been a challenge. Time management is an issue to -- I have to go to several places for my job, and I have to factor in that it takes me longer now to get there on my bike than it did in my car.

And she's had a hard time winning over friends and colleagues too.

Seibert continues:
Some people actually think I'm crazy for doing this. A co-worker of mine offered me her old car and I turned her down! I'm just at that point where I'm over cars ... and she thinks I've lost my mind. And my neighbor feels pity for me, she thinks I'm too poor to afford a car, but it's not .. it's my choice!.

It's not easy getting around Charleston purely by bicycle either.

The planners and designers of our cities are not bike friendly. They're designed for cars. Although downtown Charleston is ok, as the speed limits are low, but here on Savannah Highway, it's obviously not designed for a bike. I've had people cut me off, as they simply don't pay attention for cyclists.

Nikki has been writing about her experience on her blog The Road Less Traveled. And she hopes that by writing about it, she will get more people onto two wheels.

It started just a document of my journey of selling my car, because people wanted to know how that would work out for me. I'm hoping that I'll inspire people though to see that is doable to go car free, and make other people think -- Hey, I can do that!

She is keen to champion the benefits of biking though.

There are so many trips you can take though on your bike where you don't need a car -- to your local grocery store. And you've got to think, how does driving impact the world? People have got to think about that. People should pick one small thing in their lifestyle and attempt to change it.

Follow her at her blog The Road Less Traveled.