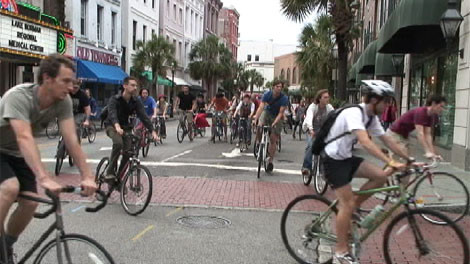 Image by Geoff MarshallImage by critmass.jpg Editor's note: We've received some negative feedback for starting off with a comment that reflects on Critical Mass's more controversial side. So, to be clear, on one hand the event is a loosely governed body of bicyclists sick of having been pushed around by cars for years, but on the other hand the event has rules and most attendees are well behaved as they know they are participating in what is effectively an urban planning rally.

And just for comparison: Friday night on King Street causes far more chaos and lasting damage to many lives. If you've ever encountered Critical Mass in other cities, you know that Charleston's Critical Mass is barely even mild by comparison.

Get another video perspective on Charleston's ride here.

Part politics, part environmental, and part fun, the last Friday of each month some 30 turn out to ride bikes through and around downtown in Charleston's Critical Mass.

No clue what we're talking about? Have you ever been downtown on Friday and seen a horde of people go through on bikes? -- Well, that's Critical Mass.

Semi-official Coordinator E.J. Merlin explains:
Its celebration or a parade. It can be a political statement for you or a personal thing.

There's no 'leader' once everyone gets going either -- instead, if you happen to be at the front of the group and you decide to turn left, then everyone will just follow you and turn left!

Traffic signals and stop signs are obeyed, but everyone stays in a group. Though, if a light turns red halfway, the rest of the group will go through the red.

At one point, the group was paused by Charleston police -- there was no trouble, only the group had hit the path of the MOJA parade coming down Market Street.

There's no official end to the ride, instead after about an hour people just start to natural say "bye! see you next time!" and cycle on their way.

If you’re interested, join them next time at Cannon Park on the last Friday of the month around 5:30 p.m.