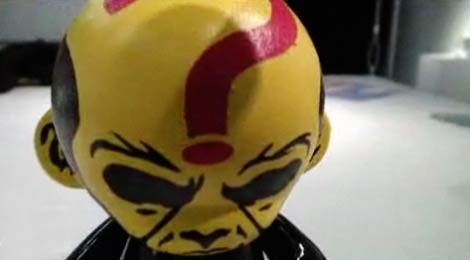 Image by TheDigitelImage by 20080823munny.jpg Geoff Marshall tells us about the show and Munnys. Editor's note: This is our first video by Geoff Marshall, who is joining us full time and will be offering video reporting on a regular basis. If you have something you think would make a great video topic, e-mail us.

The Munny Show 2.0 was a hit at Redux Contemporary Art Center on Friday night. The doors opened at 6 p.m. with more than 100 people packing out the place in time for the auction at 8 p.m.

When all 25 Munnys has been auctioned off, a little more than $5,000 had been raised for Redux's various outreach programs. The center has partnerships with the Boys & Girls Club and the Girls Scouts of America.

Seth's "Ticking timebomb" MunnyExecutive Director Seth Curico smiled wryly as he talked about his own creation -- a ticking time bomb of a Munny with enough “explosive” attached to it to rip apart its plastic soul, saying:
“It’s a dual commentary. On the state of society, and the issues in the world, as well as my own personal time bomb”.

Curico will be stepping down from his current position at Redux in the next few weeks.

B'zar at 541 King St. sponsored the event and is the only store in town that sells the blank dolls. Owner Gus Serrano said,
I've not made one myself -- I've not had the time! If I can't give 120% to something then I can't commit. I'm just happy to have brought everyone together.

Check out the variety of Munnys on the KidRobot Web site.