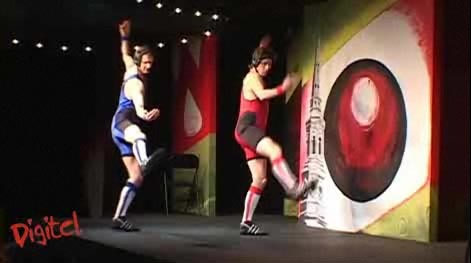 Videographer Nate Mallard and I once again headed to Theatre 99 for some fantastic comedic entertainment by two Washington state residents: Mike Mathieu and Andrew Connor who together comprise the hour-long "Cody Rivers Show: Meanwhile, Everywhere."

Get more coverage in our Spoleto special section. Sophisticatedly fashioned in traditional wrestling uniforms, this hilarious pair encouraged intense laughter from the crowd with their perfectly synced and overtly intelligent sketches.

To clear up my description, here is an example: One of the sketches they performed was probably called "opposite day," in which the two talked in opposite language with each other for roughly 5-7 minutes. It was hilarious! When one answered the phone, he welcomed the caller with "Good-bye" in stead of "Hello." It was truly seat-slidingly funny.

But your review journey needn't stop here, The Charleston City Paper has also given the act a big thumbs up.