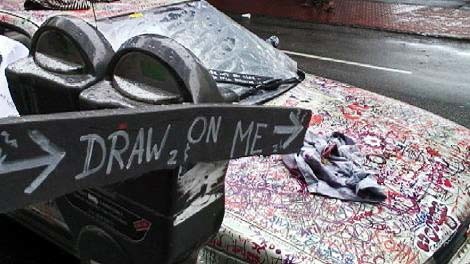 Could be a good chance to pick up a cheap car. Check it out.

Original post: Intern from Germany Daniel Schuster is driving the art world forward in Charleston as slow as his old car will let him -- by asking people to leave their mark on his car.

Here in Charleston for the summer, 28 year old Schuster soon realized that he would need a car as getting around by bike and bus wasn't working out for him - public transport wasn't as good as what he was used to back home. So he bought an old second-hand vehicle, which he immediately realised could do with brightening up, so he parked it in popular places, gave water proof pens to people, and asked them to write on it.

He got the idea after staying at a friends house where they had gotten all their friends to write on a wall - creative drawings, ideas and statements - different views on the world.

What does his family & friends think of him? "Oh they think I'm crazy!" Schuster laughs, "But my girlfriend likes it ... she was visiting a while back and was one of the first to draw on it."

I also wondered if Schuster had been hassled by the cops, but he says that his car is still street legal (as long as the license plate, lights and windshield aren't obscured), in fact Schuster says the law smiles when they see him.

If you want to catch Daniel before then though and leave your mark on his automobile, he parks on either King or East Bay streets every weekend. Catch him while you can, and check out his blog at DrawOnMyCar.com.

Schuster's internship is coming to an end this month and he'll be going back to Germany, so he expects to put the car up on eBay next week.

We'll let you know when it's up for sale.