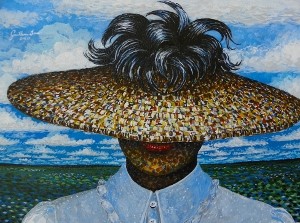 1:52 pm on Wednesday May 20, 2015 | Posted by The Citadel
Two history-steeped Piccolo Spoleto 2015 events not to miss: Jonathan Green on magnificence despite oppression; dedicating a work of art in progress

Two events steeped in the history of the Lowcountry are being held on one of the nation’s most iconic college campuses, The Citadel, as part of the 2015 Piccolo Spoleto Festival. The first will envelope the audience with emotion as they hear the difficult and the beautiful real stories behind the paintings of one of America’s great artists, Jonathan Green, from the artist himself.

“Every time I approach the canvas to express my respect for my heritage and culture I strive to capture the magnificent legacy my ancestors left me and my family, despite their enslavement, oppression, and horrific challenges they faced on a daily basis even after the Civil War and the Emancipation Proclamation,” Green said. “I marvel how under such conditions they were able to share such incredible love with one another, maintain a sense of community, create an atmosphere of belonging, and instill in their children a sense of purpose and meaning in life.”

Green's work integrates and records essential elements of American culture comparable to that of other master artists such as Edward Hopper, Elizabeth Catlett, Romare Bearden, and Jacob Lawrence. His presentation is part of the Literary & Ideas segment of the festival. It will take place at 6:30 p.m., Monday, May 25, at The Citadel Holliday Alumni Center located at 69 Hagood Ave. across from the football stadium. Tickets range from $12 - $18 and can be purchased on the festival website.

Dedicating a work of art in progress: the restoration of the historic Summerall Chapel’s organ as part of L’Organo Recital Series with Stephen Distad and Jason Langham

After lying silent for decades in moldy chambers high above the floor of The Citadel’s historic Summerall Chapel, the college’s Reuter pipe organ is slowly coming back to life.  The first of several phases is complete, funded by gifts to the college through The Citadel Foundation.

At 7:30 p.m. on Sunday, May 31, the organ will be dedicated as part of Piccolo Spoleto’s L’Organo Recital Series during a special evening performance by organist Stephen Distad and trumpeter Justin Langham, both of Houston, Texas. They will perform as Deux Voix which means “Two Voices”.

The free event will highlight the organ’s new hand-crafted four-manual console with woodwork reflecting the chapel’s carvings. However, the pipes and wind chests, suffering from the ravages of time, humidity, and neglect, are now currently being restored by the Cornell Zimmer Organ Company near Charlotte in Denver, North Carolina. In the rear of the chapel, a small section of the pipes is on display for visitors, shining like new, next to a photographic essay of the restoration process. Fundraising is now underway to support the remaining elements of the $1 million restoration.

Distad, formerly organist and choir director at First Baptist Church on Meeting Street in Charleston, is currently Music Associate and Organist at Memorial Drive United Methodist Church in Houston.  Langham, a recent recipient of the Master of Music degree at the University of Houston, performs widely in the Houston area including the Houston Civic Symphony and the Houston Ballet.  Aside from performance, he has composed a number of works for organ, symphony, and chamber ensembles.  Their recital will include organ/ trumpet duets, and solo organ pieces, and will be complemented by a bagpipe prelude and a carillon postlude.

The Citadel is located at 171 Moultrie Street. Summerall Chapel is located on the college’s Avenue of Remembrance. Campus parking is free.