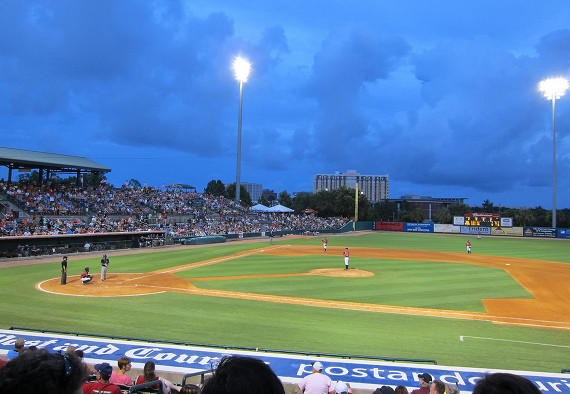 12:34 pm on Friday August 31, 2012 | Posted by Amanda Click
Charleston listed as one of the Minor League’s favorite cities

Image by Flickr user Matt Drobnik The Joe at dusk

Charleston has long been recognized as one of the best places in the world to visit. Apparently, many Minor League Baseball players who have played in the Holy City agree.

In a recent poll of 382 random Minor Leaguers conducted by MiLB.com, Charleston finished second behind only Dayton, Ohio, as the players’ favorite city to play in on a road trip. The playing field at Joseph P. Riley, Jr, Park, the atmosphere at the games created by the fans, and the many attractions the city provides are several of the reasons why Charleston placed so high.

This is just another in a long line of accolades garnered by the city and by the Charleston RiverDogs. The announcement also comes on the heels of the RiverDogs being listed as having the best playing field in the South Atlantic League.

“This is a great honor for both the city of Charleston and our organization,” said RiverDogs General Manager Dave Echols. “Charleston is a fantastic place to live, work and play. The fans always come out and fill this beautiful ballpark, and it creates a great atmosphere that reflects the hospitality and the warmth of the city. We’re glad the visiting players enjoy it here as much as our own players do.”

The remainder of the top five includes Fort Wayne, IN, Myrtle Beach, SC and Greensboro, NC.