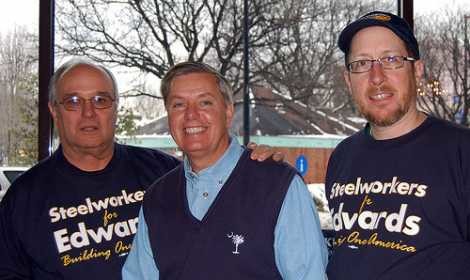 Image by Flickr user LukeGordon1Image by 20080802graham.jpg Graham is hanging out with the wrong crowd in New Hampshire if he wants to be McCain's vice president. Maybe Obama should consider him for VP ... But, regardless, look at him sporting that Palmetto pride!

Update August 3: Virginia Rep. Eric Cantor is looking like a (the?) potential pick to be McCain's running mate. Early today word spread that Cantor is getting a "thorough vetting." It's a standard practice to do on potential picks.

Even a Web site has popped up promoting Cantor for VP, pushing Cantor as "pro-life, pro-family, pro-market, pro-military."

Original post: The talk seemed to be pretty dead, but now Charleston City Paper blogger Greg Hambrick points out that our own Sen. Lindsey Graham might still be a contender for vice president. He's often seen on the trail these days with Republican presidential candidate John McCain, but had generally been seen as just tagging along.

The blogger points us to a fairly suggestive post on the vice presidential search by Time's Mark Halperin. There's not a lot of meat, but there is a photo of several potential VP choices, and the idea is given that McCain might go with someone he trusts, someone very close to him. (Such as Graham.)

Hambrick has his own opinion on Graham's chances, though.

For whatever it's worth, readers over at CNN's political stock market don't think Graham's chances are very good. Then again, the speculation about the senator as VP has been going on for more than a year, and it never seems to go away completely. But who knows?