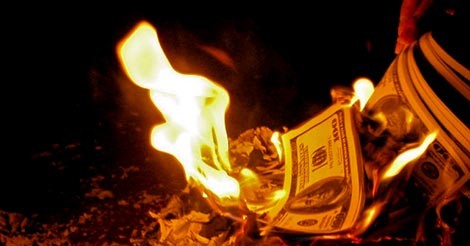 Image by Flickr user 3dom Image by 20090131-money-burn.jpg South Carolina could soon be burning cash if we keep using coal in our inefficient homes.

Wary of the disproportionally large burden South Carolina could carry under climate-helping energy reform proposed in Washington, Charleston's rep, and president pro tempore of the S.C. Senate, Glenn McConnell has a guest editorial in today's edition of The State.

His call to action, in part:
Using a $12 per ton tariff, the average S.C. household would pay $102 more annually for coal and $4.50 more for natural gas consumed in generating their electricity. If federal tariffs reach $150 per ton — a possibility if some proposals become law — the numbers are even more alarming for our state, resulting in additional annual costs of $1,270 per household for coal and $67 for natural gas.

Read more stories on this subject in our energy topic page.McConnell goes on to write about how this is because South Carolinian homes are (needlessly?) large consumers of electricity and says that our state must ready itself by using power sources that emit less carbon dioxide, and making sure that federal legislation doesn't unfairly hit South Carolina.

I'll speculate that McConnell is largely after some sort of incentive to help us use more atmosphere-friendly forms of electricity, and, hopefully, give homeowners grants that increase energy efficiency.

Once again, we see that the proposed coal plant near Florence is a bad idea -- already it would make our state's mercury problem worse, and may only invite more problems in the form of more tariffs.

At any rate, McConnell's column is a good read. Go check it out. -- Bear in mind that he's a Republican, and I think he's got a pretty progressive stance coming from that side of the field.

Oh, and The State's link to the energy report is busted, here's the fixed one.