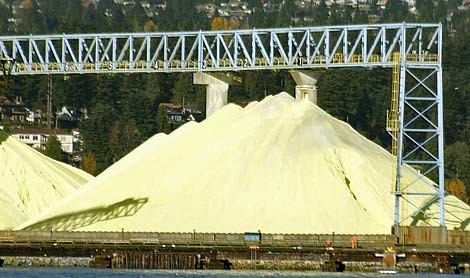 Image by Flickr user SkrewtapeImage by 20081122-sulfur.jpg Sulfur: There's a lot in the diesel fuel used in shipping activities, and The State says that DHEC may not have taken its side effects seriously enough.

Continuing their look into the roll of the S.C. Department of Health and Environmental Control, The State looked at how the department has handled the permitting of a major port expansion in Charleston with regard to our air quality.

They say, in part:
Under pressure to authorize a $900 million port expansion, the Department of Health and Environmental Control approved permits in late 2006 and early 2007, allowing construction to begin — before receiving the results of three major air pollution studies.

The paper continues to drive that the agency isn't acting with enough force or that it is lacking sufficent political power to protect the health of the state's residents.

And there's certainly a lot to be said about DHEC's dealings with the State Port Authority. But, as usual, this story makes little mention of how most of the pollution comes from the nasty fuel the ships are burning, which is not an easy thing for DHEC to control. However, a more aggressive DHEC could push a requirement up to the Legislature that ships in South Carolina's waters must burn cleaner fuel.

Chew on this: Port traffic is aiming to use fuels with 15 parts per milliom (ppm) of sulfur, trains often use 500 ppm. And ships? They use fuel with, on average, 27,000 ppm of sulfur.

And sulfur is particularly bad for three things we have a lot of here: The young and old, historic buildings, and water quality.

But, in all fairness, national efforts to control the pollution from ships have met with little success.