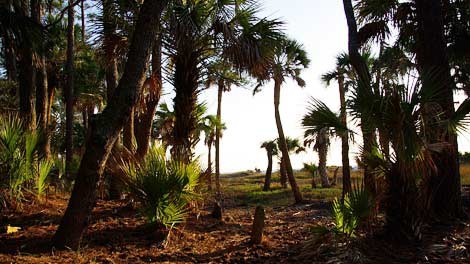 Image by TheDigitelImage by 20080724_palm_trees.jpg Palmetto trees in South Carolina are almost as ubiquitous as their namesake bug. A shame this disease wasn't killing them off.

A somewhat-unknown disease is popping up near Tampa, Florida, and turning palmettos yellow and killing them. It has researchers and citizens concerned it could not only kill off the tree in Florida but possibly work its way up to South Carolina and kill our state tree.

For now the infection hasn't moved too far from Florida's west coast after showing being identified by University of Florida researchers on July 10. Researchers are analyzing the DNA of the deadly phytoplasma, but can say it's not lethal yellowing, though they suspect it's Texas Phoenix palm decline.

An infected palmetto.That condition first showed up in Florida about two years ago but has only affected Canary Island date palms, edible date palms, wild date palms and queen palms. Though a DNA-match still needs to be made to Texas Phoenix palm decline. If it is the same, researchers suspect the infection is being spread by a bug is moving between trees.

Concerned palmetto owners in Florida are being advised to pay for a "couple-hundred" dollar series of injections of an antibiotic, called TreeSaver, by a professional into sick-looking palms. Though cautioned is urged when a tree looks ill in South Carolina as the disease has not yet been observed here, and it may improve with time. But, if you're concerned, extensive information is available online about the condition.

Both state's Cooperative Extension Service experts call for calm and reasonable future management of the cabbage palm. These beautiful trees can show symptoms that resemble TPPD but are not necessarily infected with the disease. Give your tree a little time to make sure it is beyond recovery.

The palmetto been South Carolina's state tree since 1939. The Cabbage Palm, as those Floridians call it, have only had it since 1953. And they even had the wrong palm on their state flag until 1970. Using the wrong picture and calling it by such lame name? Surely this is a sign the state is unworthy, and needs to starting treating this tree properly.

But, in seriousness, hopefully they can find whatever is causing this and isolate it. Hopefully our colder weather will help prevent its spreading to here.