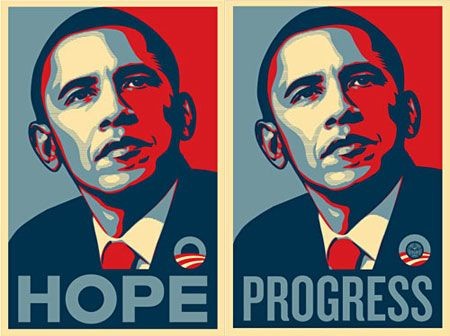 The world is shrinking. Here we have a story about a Charleston-born artist, living in L.A., who is exhibiting work in Boston. And somehow it all hits home.

Fairey is swimming in a pool of media attention. His Obama-inspired portrait hangs in the National Portrait Gallery in Washington. His “Obey” catalogue is ubiquitous. But his artistic reputation is in question.

Some people call Fairey a modern day Warhol. Some call him a fraud. And still others call him a criminal.

After boasting to the Boston Globe that he has at least 14 arrests to his name, Fairey, en route to Supply and Demand, a solo show at the Institute of Contemporary Art in Boston, where he planned to spin records and probably sign some stickers, was arrested by police, who waited for him with two outstanding warrant charges in hand.

It seems the graffiti artist lived up to his reputation, tagging the Boston University Bridge and other city locations.

Fairey did not spin records or sign stickers that night. He did not revel in the spotlight—or at least the one for which he had planned. But he did throw another stick in the fire. Being arrested on the way to a highly publicized show is both annoying and opportunistic. Either way, it sets the already growing notoriety of this artist ablaze.

Fairey was arrested this past Saturday in Boston.

To his friends in L.A., Fairey’s arrest in Boston will undoubtedly raise a point in discussion. To his family and fans in Charleston, it’s cause for pause and celebration. And to art-hounds everywhere, Fairey’s arrest and subsequent media coverage is a platform from which opinions spatter like Jackson Pollock’s paint.

Here’s some recent comments posted on the Boston Globe.

1) Graffiti is pollution. All you "open-minded" big thinkers who think that graffiti is some sort of art should open up your homes to these defacing menaces and let them paint their garbage all over the outside of your homes. If they are artists, then let them paint some pictures and sell them to people who might want to buy them, instead of defacing other people's property,and causing blight and decay

3) Tagging and Graffiti art are two different things. Taggers give graffiti artists like SF a bad name. I don't think what SF does is "pollution" as one post described it. I agree that the placement of graffiti art needs to be controlled but at the same time, I prefer the Obey and other Fairey street art to the giant corporate billboards I am forced to look at because a multinational corporation has the money to shove it in my face (Justin gave Pepsi as an example).

These views fuel the fire. Street artists paint the streets. Opponents disparage them. And media chronicles the drama. It’s interesting, though, to listen to opinions from Charleston, Boston and Los Angeles.

From the L.A. Times:

This year, some of the most arresting images in the race for the White House are not the work of ad agencies, political consultants or photojournalists but of a subculture of artists who use the streets as their canvas. Their pro-Obama work — there is no similar phenomenon for John McCain — has been spotted everywhere, even Paris and Beijing.

It’s an odd twist in the world of street art, an arena where creative renegades question power and convention with their homemade posters and hand-painted murals — and don’t usually endorse major party politicians.

From the Boston Globe:

When Fairey returned recently to Boston for his show at the ICA, he allegedly "victimized new properties while defiantly stating in media outlets that he will not stoop his unauthorized posting of his tag," according to the affidavit requesting a warrant for his arrest. "Suspect Fairey continues to engage in a constant and systemic assault on Boston Neighborhoods."

In media interviews leading up to his ICA show, Fairey admitted, according to the affidavit, "illegally tagging property ... recently in Boston."

Let’s not be naive and think Fairey doesn’t know what he’s doing. The man built his reputation by rabble-rousing. Also, let’s not think the Boston Police are just doing their job. They built their reputation in part by sidelining hotshot folks from out of town. And finally, let’s not think those of us in Charleston will tire of Fairey making headlines. We’ve built our current artistic reputation on his shoulders.

For more coverage, check out this Slide Show and article.