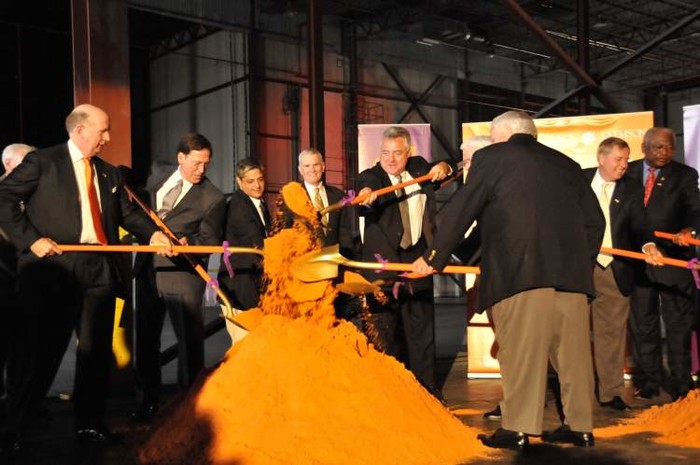 Over the next two years, $175 million will be invested in constructing the campus, with only approximately $10 million coming from the state. The entire campus is scheduled to be completed in two years. Work that needs to be done includes renovating three large buildings to be laboratories, constructing the engineering center, and rebuilding a structure for materials manufacturing innovation.

﻿The Post and Courier has an in-depth report about the campus construction; check it out here.

Update October 28, evening: The ground break ceremony went as planned, and the facility is expected begin operation in 2012.

While Clemson has a report, if you'd like to know more about the what and why that caused the facility to become a reality, I'll suggest the Charleston Regional Business Journal report.

Update October 28: Well it's been nearly a year since word came that Charleston would be the epicenter of $98 million in grants for a "large-scale wind turbine drive train testing facility," and today, October 28, Clemson University is breaking ground.

Speaking will be a host of notable folks: Clemson University President James F. Barker; David H. Wilkins, chairman of the board of trustees; and John Kelly, executive director of the Restoration Institute and Clemson vice president for economic development; and guest speakers are slated to include include Sen. Lindsey Graham, Rep. James E. Clyburn and North Charleston Mayor R. Keith Summey.

First reporting, November 23, 2009: Today is the biggest day for economic news in the Charleston area since Boeing said it would come: $98 million has been secured to establish a large-scale wind turbine drive train testing facility at the former Navy base in North Charleston.

Read more stories on this subject in our energy topic page.Here's highlights from the press release about the deal for the Clemson University Restoration Institute (emphasis added):

The award is the largest single grant ever received in the university's history and represents an enormous economic development opportunity for the region. ...

The testing facility will be housed in Building 69, a former Navy warehouse adjacent to existing rail and ship-handling infrastructure, and will be capable of full-scale highly accelerated testing of advanced drive train systems for wind turbines in the 5 megawatt to 15 megawatt range, with a 30 percent overload capacity. ...

Planning and construction of the facility will begin in the first quarter of 2010 with a targeted operational date in the third quarter of 2012. ...

The Department of Energy estimates that South Carolina could gain 10,000 to 20,000 new jobs related to the wind power industry during the next 20 years. ...

In the short term, the Restoration Institute estimates the initiative will create at least 113 temporary jobs associated with construction of the facility and 21 full-time jobs. It also will generate 568 indirect jobs for a total of 852 jobs.

To learn more check out the full release or this brief write-up at The Post and Courier.

Lately there has been an upswing in local news about wind energy.