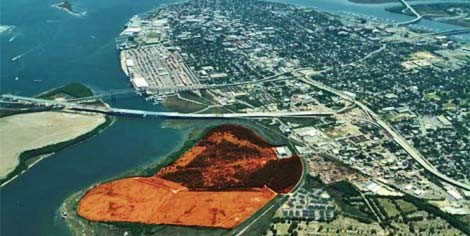 Image by TheDigitel/City of CharlestonImage by 20080803promenade.jpg Aerial of development site, The Promenade property is shown in red.

Plans for "The Promenade" have been brewing for years and are finally starting to take shape.

The 200-acre Lower Neck site would be developed by The Ginn Co., a Florida-based developer, atop and near the former Romney Street and Holston landfills.

The site is readily visible when heading to downtown from the Cooper River Bridge, and sits just past the Charleston County Recycling Center.

Included in draft plans are:

There's a bit of confusion over the development's potential role in the arts scene. A city e-mail stated the development would offer a host of venues to the city's ailing venue scene, including an outside amphitheater, concert hall, rehearsal space, et al.

That e-mail was later retracted by the city official that sent it, saying she had jumped the gun. It's all still a bit up in the air, especially as 2006 plans showed the site as mainly a golf course (which has totally disappeared in newer plans). And a Ginn Co. spokesperson, Will Bagwell, told the Charleston City Paper that most of those ideas were doable, but that the amphitheater would be unlikely. But, Ginn Co. renderings over at The Post and Courier show the amphitheater.

So, what's it all mean? Things are still being figured out, and though the workshops are over, you can still make yourself heard. Contact Ana Emelianoff at the City of Charleston (724-3789).

The Ginn Co. is taking input from the the workshops and refining its plans before re-presenting them to city officials. The company has already started prep work on the site, but no date has been announced for the start of construction, though the company hopes to have people moving in to the development within 2.5 years.

The Post and Courier offers a lengthy narrative on the meeting and project.

The development joins The Magnolia Development in bringing much growth to the Neck, that project plans to build some 4,400 units.

Update August 26: The Charleston Regional Business Journal has a story on the business environment and how the Ginn Co. is dealing with risks associated with building atop old landfills.