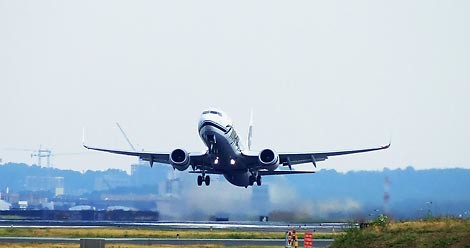 Image by Flickr user Joshua Davis (jdavis.info)Image by 20080826flightdelays.jpg Takeoff: Less of this is happening thanks to a communication failure.

Update 9 p.m.: Warnings for delays at Atlanta related to the failure are over.

Update 7:30 p.m.: The FAA is reporting the situation has been resolved and has removed the delay for flights going from Charleston to Atlanta, however, they say flights leaving from Atlanta are still on a 2 hour delay.

Original post: Communications failures at a facility south of Atlanta are delaying flights at all major airports and, by effect, impacting Charleston.

According to the FAA, flights leaving from Charleston to New York are delayed around an hour, while no flights are going to Atlanta until at least 5:30 p.m. (Update: now 7 p.m.)

All traffic leaving from Atlanta is generally experiencing delays of an hour-and-a-half and growing, while landing delays are generally less than 15 minutes. Get the latest on Charleston delays here.

CNN is reporting on the delays, saying in part:
The facility south of Atlanta is having problems processing data, requiring that all flight-plan information be processed through a facility in Salt Lake City, Utah.

Be sure to check with your airline for specific delays.