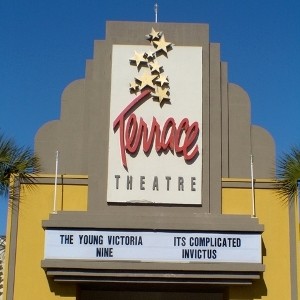 8:37 am on Tuesday March 18, 2014 | Posted by mike_mccann_3
The Terrace Movie Theatre is the Embodiment of Locally-Owned

For a long time it seemed that big corporations were taking over the world. Wal-Marts popped up everywhere, you couldn't go 2 blocks without seeing a Starbucks, and McDonald's was more of a house-hold name than ever.Then we started to see a paradigm shift.

Since The Terrace Movie Theatre is not part of a large franchise, they can pretty much serve what they want. They are the true embodiment of locally-owned.They have a wide variety of traditional "movie" foods like popcorn and sodas. But they also carry over 50 varieties of beer and wine.

They don't always show the biggest blockbusters out, but they always have the films that are critically acclaimed (such as Monuments Men). If they don't want to show a film, they don't have to. Nobody is pushing movies down their throat.

When establishments have more leeway to serve their customers, they are able to create better experiences. Think about it, when was the last time you walked into a Wal-Mart and thought, "This place is so unique!" and then got blown away by customer service. Odds are pretty slim. The more creativity an establishment can operate with, the better experiences it is able to create for it's patrons.

Yes, the Terrace Movie Theatre is awesome. But the large companies are as much to blame for this shift. I'm not necessarily speaking about the movie industry and its big players, such as Regal. Rather, large companies in general have lost our trust.

A number of years ago, the American public was completely let down by huge companies ranging from Enron to Wells Fargo to GM and Chrysler. This is also the time we start to hear how bad McDonald's really is for us. We couldn't invest, go to the bank, buy a car, or eat anywhere that we trusted when it came to the "big brands" of the day.

People are getting tired of being screwed over by large companies they cannot trust. So many of us start our own establishments and begin to support more local businesses since we know how hard it is to make a small business thrive. Thus, the paradigm shift back to locally owned businesses.

Yesterday, I wrote about a film I saw about a blind surfer. The Derek Rabelo touched me and I was inspired by it. That wouldn't have happened without The Terrace Movie Theatre holding a private showing.

When we came to the movie there were some brief announcements about how the night was going to play out. First, the owner (who is there nearly every time I am) came out and introduced himself and said how excited he was to be able to house everyone that night and that he was glad to be a part of it. The house was packed and they nearly sold out 3 theatres for this screening, all for this single movie!

Then the guy who brought the movie to The Terrace (a local christian surf organization) came up and spoke about the raffle they were going to do after the show. Usually after a movie, everyone bolts as soon as they can. The Terrace even allowed the organization to raffle off a surfboard and 8 other door prizes after the movie was done. And did I mention this was on a Friday night? Usually on a Friday night, movie theatres want people in and out as fast as humanly possible to get the next round of people seated.

Not only does The Terrace get involved with productions such as this, it's where I go to church.  The Terrace rents out their main theatre to Seacoast James Island every Sunday so we can hold service (we don't have a physical building yet). They are open to working with the community in many ways, some that most of us would never even imagine.

I'm sure The Terrace benefits from both of these methods of community involvement, as any opportunistic business would. However, that's what makes this place unique, the giant movie theatre at the mall would never do any of these things for the community.

When we support local businesses, like The Terrace, we encourage entrepreneurship, we keep more jobs in the community, we lower our taxes, and we even conserve the environment.* What local business can you choose over a big company this week?

*What Happens When You Shop Local

Head to the source at pickadirection.com
Advertisement