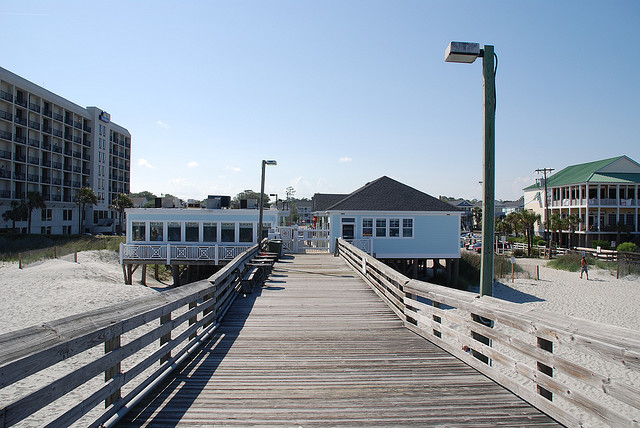 Update 9/29 (repair work approved): While the second story option has been voted down by Surfside Town Council, they did approve structural repairs.

The repairs are mostly replacing some pylons as well as bringing the empty restaurant up to code. For the latest details, read The Sun News story. For the back story, scroll way, way down this page.

Update 8/24 (costly renovation): Town Council is investigating adding a second story to the pier as a part of their renovation plan.

According a recent evaluation, the pier is in pretty good shape given it's age. But to find out the feasibility of adding a second story would cost $50,000 for the engineering study. The Myrtle Beach Herald has a couple more details. Read them here.

Want the backstory for this ongoing saga? Keep scrolling this page.

Update 7/12 (Legal briefing): The Town of Surfside Beach is holding a public meeting tonight to brief everyone on the lawsuit.

See the updates below about the lawsuit they will be talking about. WMBF provides more information about the meeting.

Update 7/5 (Lawsuit): The pier situation just got even messier for the Town of Surfside Beach.

Update 6/29 (Renovations approved): Town Council has approved the plan to do the renovation project proposed by the committee.

Update 6/28 (Discussion tonight): The Pier Committee of the Whole will be meeting again tonight.

This is a month after the Pier Committee of the Whole﻿ had their last meeting to make progress on finding a tennant for the empty space once occupied by Nibil's restaurant. As a result, the tackle shop lease is coming under question. Gina Vasselli goes into more detail on The Sun News website. Read it here.

Some of the suggestions from the workshop meeting include  and building new structures. Lindsay Theis of WPDE has more details about the proposed improvements. Read it all here.

What do you think they should do with the pier? Sound off in the comments below.

First Report (with backstory): After the town of Surfside Beach acquired the pier property a few years ago, they put out an open request for lease proposals. The pier has been in turmoil, and a hot button issue, ever since.

In that original request for the bids, there were only two proposals submitted. One was from Nibil's restaurant which was already occupying the space for the last 23 years and the other was from a new group formed by local TV personality Cecil Chandler and a few other well known locals. Neither of the original bids were accepted due to them being "incomplete". A lot of locals were upset by the move. A second round of bids were requested and the only thing Surfside Beach received was a letter from the Nibil's owner telling them his intent to vacate the pier space once their lease ended on December 31st, 2010. It's been empty since then.

Earlier this year, Surfside Beach requested to bypass the bidding process completely and recently had approved a new potential tennant pending a proper background check. Well apparently the town council doesn't like the company that this new tennant keeps and have decided to cancel the lease before it even started.

The Sun News has the latest on why the lease approval was cancelled and what the rejected tennant has to say. Read it here.