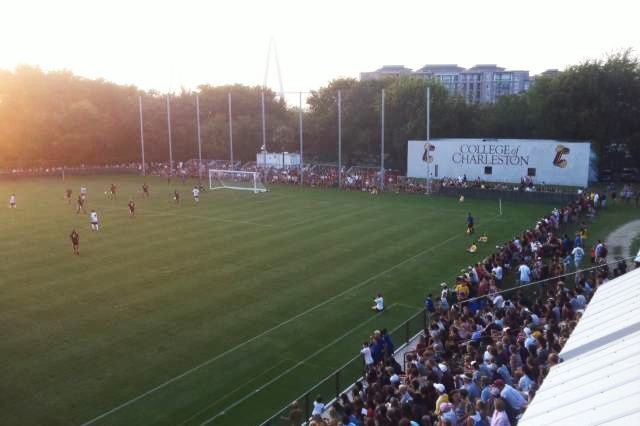 The College of Charleston men's soccer team upended No. 15 South Carolina, 3-2, in front of a record-setting, 2,931-fan crowd at Patriots Point on Sunday evening.

The match was the season opener for both squads. CofC (1-0-0) has now claimed four of the last five bouts with South Carolina (0-1-0).

"The team stepped up tonight in a big way," said head coach Ralph Lundy. "I'm very happy with them right now. South Carolina put a lot of pressure on us but we held even when it was most severe. We also took advantage of our chances tonight and that's why we got the result."

"This was a huge win for us," said Craven. "It's a big rivalry and we took it to them. We played with great teamwork and are thrilled to get this win."

After the teams exchanged a handful of missed chances, Ralphie Lundy (Mt. Pleasant, S.C.) played a ball to Twohig in the middle of the field. Twohig creatively flicked the ball through the Gamecock defense with one touch to spring Craven alone towards goal. Craven beat charging South Carolina keeper Alex Long by feigning an early shot and rolled the ball into the gaping net for the eighth-minute goal.

South Carolina equalized moments later, however, when Chipper Root flicked a ball into the top of the box where an unmarked Bradlee Baladez headed the ball into the far side netting to temporarily hush the fired-up crowd.

The Cougars, not deflated by the Gamecocks' equalizer, pushed forward and reseized the lead with Craven's second goal in the 20th minute. On a 35-yard set piece, Lundy bent an in-swinging ball into the box where Craven sprung to the head of a crowd and deflected the ball past a helpless Long.

The remainder of the second half became increasingly more physical but the Cougars were able to thwart the Gamecocks and take the lead into the break despite being outshot, 10-5, in the period.

The passion fueling the rivalry was obvious by the teams' exertion in the second half. Both teams played a physical brand of soccer which brought on 13 second-half fouls and a pair of yellow cards.

South Carolina finally broke through the Cougars' defense when Danny Crates sent a far-side throw into the box where it rattled around before Braeden Troyer tucked it into the net in the 71st minute.

In the 82nd minute, Craven narrowly missed his hat trick when he took a flipping, bicycle-kick style strike at a ball put into the box by Twohig but Long was up to the challenge.

Seconds later, Twohig lifted CofC to the lead once more when George Khoury (Mt. Pleasant, S.C.) kept a ball in bounds and played a ball along the endline to the goal mouth where Twohig booted it into the upper-right corner of the net to give CofC the 3-2 lead.

"It was a great ball [from Khoury] out wide and I saw when to make the run," said Twohig. "I went near post and took advantage of it."

The Cougars wouldn't surrender the lead again and closed out the dying minutes to preserve the 3-2 win.

The Cougars were more possessive than the Gamecocks and were content in making challenging runs as opposed to forcing shots. As a result, the Cougars trailed, 21-17, in shots but had a higher percentage of on-target balls.

The match drew in a record-breaking crowd despite being rescheduled from its originally slated time on Friday, Aug. 26. The crowd was the biggest-ever for a soccer game at Patriots Point.

The Cougars stay at home to host the 11th annual Nike / Aaron Olitsky Memorial Classic at Patriots Point over Labor Day weekend. The Cougars host Princeton on Friday, Sept. 2 at 7 p.m. and Rutgers on Sunday, Sept. 4 at 2:30 p.m.