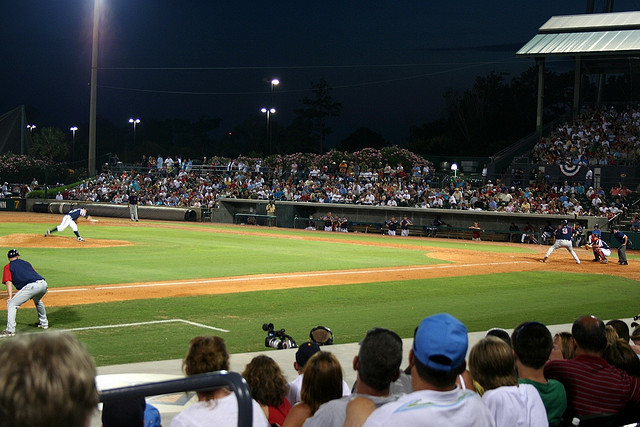 Update April 4, 2012: The Pelicans have signed a one year agreement for the naming rights of Pelicans Ballpark. Ready for it? It's a mouthful.

"TicketReturn.com Field at Pelicans Ballpark" may not have the same catchy cadence as "Coastal Federal Field" but it is what it is. WMBF News has more details here.

First Report: A gem of the Grand Strand for the last 13 years, the Myrtle Beach Pelicans ballpark will soon have a new name to go along with its new playing surface, installed this offseason.

The changes help set the stage for another great summer of Myrtle Beach baseball and future marquee community events.

"Our main goal is to create memories for our neighbors and guests whether it's at a baseball game, musical performance or a community event," said Pelicans Chairman Chuck Greenberg. "The venue's name becomes an indelible memory for our fans that lasts a lifetime. We are very excited to complete a new partnership soon and to unveil a new name prior to Opening Day of what for now we'll simply call Pelicans Ballpark."

Pelicans Ballpark opened as a state-of-the-art facility in 1999 thanks to combined efforts from the City of Myrtle Beach, Horry County, Burroughs & Chapin, devoted baseball fans and the ballclub. Originally named Coastal Federal Field, BB&T took over the naming rights in 2008 after acquiring the local bank.

"Without corporate partnerships, it's difficult to provide the value and wholesome family entertainment of professional baseball and other events the ballpark has hosted," said Pelicans GM Scott Brown. We thank Coastal Federal and BB&T for their support over the past 13 years as our stadium naming rights partner, and look forward to creating and expanding existing partnerships with those who share our commitment to Myrtle Beach and the Grand Strand community."

Current ownership, led by Greenberg, purchased the Pelicans mid-way through the 2006 season. After that season, the Pelicans invested $2.5 million in the capital improvements, installing a new videoboard, creating the nation's first baseball-front beach down the leftfield line, constructing leftfield bleachers and adding a new free-standing ticket office as well as updating the park's grill stands. The stadium is regularly ranked as one of the nation's best, and was honored with the Carolina/California League All-Star Game in both 2008 and 2010.