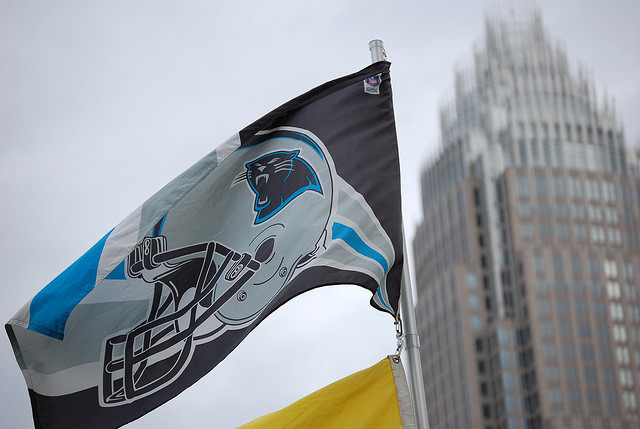 The Carolina Panthers offense, number one in the league in rushing last season, is just fine. After a slow start last week against the Tampa Bay Buccaneers the Panthers came out on a mission against the New Orleans Saints in their home opener at Bank of America Stadium.

Carolina defeated New Orleans for the first time in the last five match ups and their first win of the 2012 season by a score of 35-27 to move to 1-1 on the season. The Saints fall to 0-2 on the year after losses to the Redskins and Panthers.

The Panthers offense got it done first with the running game and featured all backs who are healthy for the first time this season. Touchdown runs were scored by Cam Newton (5 yards), Mike Tolbert (2 yards), DeAngelo Williams (3 yards) and Jonathon Stewart took a beautiful screen pass in untouched from 17 yards out.

The scoring actually got kicked off by the defensive side of the ball as Charles Godfrey returned an interception thrown by Drew Brees from the New Orleans end zone to tie the game at 7-7 with 5:33 to go in the 1st Quarter.

“We pride ourselves on turnovers...with Drew Brees he's good at getting out of the pocket and making plays and you have to be disciplined on the back end and when he threw that ball and I get it in my hands I'm thinking about scoring and that's what I did,” said Godfrey, “...when you can capitalize on a play like that it gives you momentum on the defensive and offensive side and I believe that's what that play did for us today.”

The Panthers offense ignited in the 2nd quarter and set out on a record setting day from there. In his first action of the season, Jonathon Stewart took a wide open screen pass into the end zone from 17-yards out to give the Panthers their first least of the game 14-13, with 3:33 to go until halftime.

After a 3-and-out by the Saints, the Panthers put on a 2-minute drill moving down the field in 8 plays covering 58 yards in just over two minutes. The drive was capped off with a 2-yard touchdown run by Coastal Carolina Alum Mike Tolbert, giving the Panthers a 21-13 lead going into the half.

“The win is big, 0-2 in the division is hard to come back from,” said Tolbert who scored his first touchdown as a Carolina Panther, “we're built for a run, we're built for a championship, we've just got to go out and have the attitude that we can't stop ourselves and we have to make every play count.”

Defensively the Panthers made life difficult on Drew Brees and the Saints all day. Brees was pressured in the backfield numerous times and had a hard time finding any of his receivers open down field, being forced to dump off to his running back on multiple occasions.

“All week we were in the film room studying those guys and I think that was a big help for us,” said Coastal Carolina Alum and Cornerback Josh Norman, “we as the back seven were holding guys off and passing off routes to the next guy...I feel like communication was the biggest thing that helped us win this game.”

Drew Brees was hit five times, sacked once, had one fumble and two interceptions, the second by Jon Beason to seal the victory in the final minute. Brees was able to go 31 of 49 for 325 yards but not without some creativity as he was rushed around the field and harassed all day by the Panther defensive line.

DeAngelo Williams got in on the action midway through the 3rd quarter capping off a 6-play 80 yard drive that gave the Panthers a 28-13 lead with 8:17 to go in the quarter and it appeared Carolina was in full control.

Cam Newton capped off a record setting day by completing the backfield foursome of touchdowns when he ran the ball in from 5-yards out with 9:58 to go in the game capping off another 6-play 80 yard drive for the Panthers. That drive featured a 66-yard reception to a wide open Steve Smith on the opening play putting Smith over 100 yards receiving for the 40th time in his career.

On what was going through Cam Newtons mind when he saw Steve Smith wide open running down the right side line he said, “I was thinking a lot of things. I was thinking first off, I better not overthrow him. Second-off, I'm happy that I saw him. And third-off, give him a catchable ball so he can run with it.” Newton went on to discuss the play saying, “I was shocked just as much as you guys were. For everybody on this field to be wide open, Smitty would be the last person.”

Receiving wise Smith was not the highlight of the day though as LSU alum Brandon LaFelle let the city of Charlotte know he is hear to replace Smith as the #1 receiver down the road.

Brandon LaFelle had six catched for 90 yards, plus on a fake pitch to Jonathon Stewart LaFelle took the hand off in motion for 25 yards.

“I kept getting the ball thrown to me and built a lot of confidence,” said LaFelle crediting all the coverage applied to the other big name receivers on the team, “when Steve (Smith) and (Greg) Olson are pulling double teams and I'm in one-on-one I have the biggest smile on my face in the stadium and that's going to happen a lot this year.”

The Saints were able to score on a 1-yard QB sneak by Brees to pull within 8 with under two minutes to go in the game, and they did force the Panthers to go three-and-out and give the ball back to them in the final minute. The Beason interceptions ended any hope of an unlikely comback and set Bank of America Stadium into their rendition of Sweet Caroline and a victory celebration.

The Panthers improve to 1-1 on the season and will have a quick turn around to face the New York Giants at home on Thursday night. New Orleans falls to 0-2, and will face the struggling Kansas City Cheifs next week.

Charles Johnson had his 7th career forced fumble on a 4th down when Brees dropped back to pass. Brees picked the ball up and threw down the field for an incompletion.

Cam Newton set a QB rushing record at Carolina with 13 rushes for 71 yards, including a 40 yard run down the right side of the field on an option keeper.