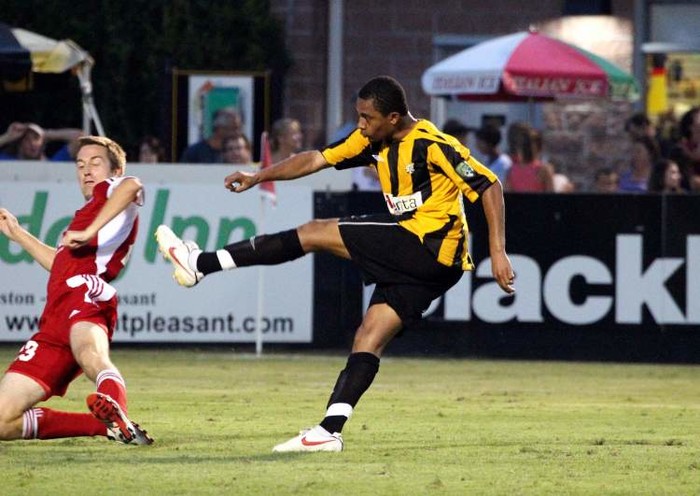 4:39 am on Saturday July 10, 2010
With nine on the field, Charleston still in first after showdown with Richmond

Read more stories on this subject in our Charleston Battery topic page. O’Brian Woodbine scored the game winner, his first for the Battery, but was ejected late in the game after receiving a second yellow card. John Wilson was also shown red for a tussle with Kickers striker Matt Delicate in injury time as the Battery finished the game with nine men on the field.

“The events that happened tonight weren’t great, but we got three points, which puts us five points ahead in the league and clear of Richmond,” said Head Coach Mike Anhaeuser.

Richmond’s first chance of the game came in the 19th minute when Stephen Nserko passed to forward Matthew Delicate who crossed the ball into the box, which proved too far for his fellow teammates.

Charleston retaliated shortly after with a long ball from the right sideline by Ian Fuller. Fuller found the head of forward Tom Heinemann, but the ball was grabbed just out of reach by Kickers’ goalkeeper Chase Harrison in the 20th minute.

Minutes later, a deflection from a Richmond defender gave Battery forward Lamar Neagle a shot from about 25 yards out but his well struck effort cannoned back of the crossbar.

Charleston scored the decisive goal in the 48th minute after Tom Heinemann beat Richmond’s defense to play a through ball to O’Brian Woodbine just inside the box.  Woodbine split the defenders and hammered his shot home past Kickers goalkeeper Chase Harrison.

Midfielder Brandon Massie came close to putting in a second chance for the Battery when he crossed from the far right side to meet Heinemann for the header, but was kept out of reach by Harrison in the 50th minute.

The game took a strange turn after Woodbine was ejected in the 82nd minute for delay of game with the referee indicating that he did not take a throw-in fast enough.  Then in stoppage time veteran defender John Wilson and Richmond forward Matt Delicate were both sent off as the teams tussled just outside the Battery penalty area.

The Battery will return to Blackbaud Stadium next Friday July 16th at 7:30 pm to take on the Real Maryland Monarchs.