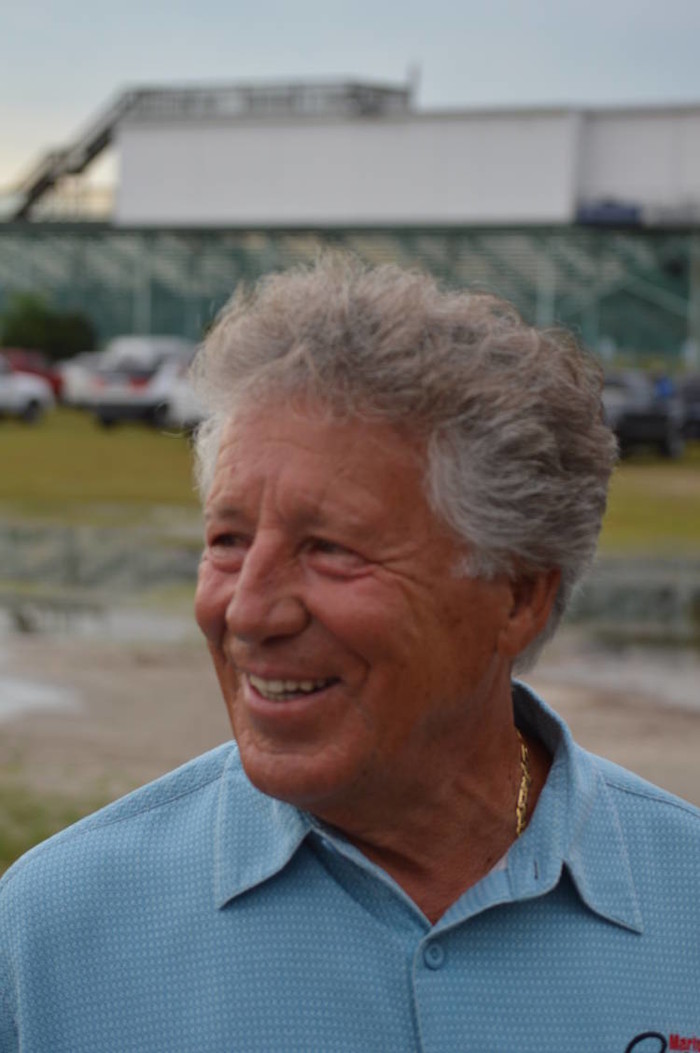 When I posted a picture from the Myrtle Beach Speedway on Saturday night, there was no more appropriate hashtag than #livinthedream.  On behalf of TheDigitel Myrtle Beach I had the opportunity to interview racing legend, Mario Andretti, which immediately resulted in crossing a item off my bucket list.

Let me set the scene.  In the speedway area, it had been down-pouring, complete with alarmingly close, brilliant lightning for no less than 40 minutes.  I called before venturing over there, fairly certain the event would be cancelled.  A decision had not yet been made.

When I arrived, the entrance was peppered with race cars on trailers.  No doubt those teams were holding out, trying to avoid paying entry fees if the rain didn't stop.  While fees are honored in the event of a rain-out, they only apply to the next event scheduled for that series.  In this case, that would be this coming Thursday, August 2, 2012, and word around the garage is that weeknight events are sometimes difficult for teams to attend given their day job work schedules.

As I entered the office, there was still some uncertainty whether or not the event would take place, though there was a lot of confidence that Mario Andretti would, indeed, appear.  With some time before his anticipated arrival, into the infield we went, just as the track was coming alive.

If you're a fan and have ever watched almost any series race on a large track, you've seen the massive jet dryers often brought out when there is water or considerable debris.  At the Myrtle Beach Speedway the drying system is a little less sophisticated, but effective nonetheless.  The process started with a pair of leaf blowers.  Next, there was a lone pick-up truck doing laps.  Last, the big guys were brought out.  It was the large tires on the school buses featured in the weekly Wheels of Destruction show that ultimately dried the track to where it was safe to race.  Can you imagine what Mario Andretti thought when he saw that from his helicopter, circling the venue?

Being that my journalist roots are planted quite firmly in the conversational social media world, I took pleasure in watching my traditional media counterparts have an unrushed opportunity to interview the racing legend.  He talked casually about how tracks like the Myrtle Beach Speedway are so important in building the foundation of auto racing, noting that no one starts at the top.  He genuinely seemed to delight in questions about his racing accomplishments and impressions of our area.

Next, I asked if he could comment on the rumor that the Andrettis were returning to Sprint Cup for the 2013 season with Matt Kenseth in the driver seat.  He said he had no new information, however, these deals tend to come together quickly if they're going too, so time would tell.

Last, I asked if he'd ever consider hopping back into a Grand Am series car as part of an Andretti dream team consisting of Mario, Michael, Marco, and John or Jared.  His answer made me laugh.  He said he and Marco (his grandson and current driver in the Izod Indycar series) would do it without hesitation.  It's Michael (Mario's son) who says he's too old at the age of 49.  For the record, Mario is a very young 72.

After the conclusion of media interviews, Mr. Andretti talked to the teams at the drivers meeting, during which officials explained the expedited schedule.  There was concern expressed for ending the event at a reasonable hour due to the noise affecting surrounding neighborhoods.  In the remaining time before racing started, Bob Lutz and Mario Andretti toured the infield, talking to whomever wanted to meet the speedway's distinguished guest.

It's likely that the delayed race schedule and dwindling daylight extended Mario's stay beyond his original plan.  Yet this allowed him to join winners in victory lane and proceed with driving the pace car for the evening's main event.

I've spent a lot of time at the Myrtle Beach Speedway this season and have watched the new ownership sink in.  At any moment Bob Lutz could have cancelled Saturday night's event due to weather.  The infield was a swamp and a pole was damaged as a result of the rain.

Despite a reasonable expectation of low spectator turnout, he forged forward.  Based on the amount of time he and Mr. Andretti spent with so many people, it's my opinion the decision to hold the race as scheduled was partly made to honor a commitment to drivers, teams, officials, and fans.  They were promised an opportunity to connect with the "Driver of the Century" and we got exactly that.

For more on Mario Andretti's visit to the Myrtle Beach Speedway have a look at this well written article from the Sun News and a photo gallery.