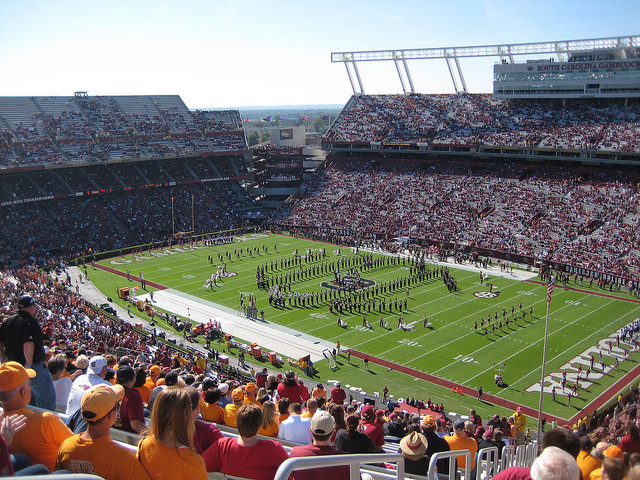 The Southeastern Conference has announced its 14-team conference game schedule for the 2012 season. In conjunction with that announcement, The University of South Carolina has released its complete 12-game 2012 schedule.

The Gamecocks will open the conference season on Thursday, August 30, when they travel to Nashville to take on Vanderbilt. The game will be televised on one of ESPN's platforms.

The 2012 schedule is not based on any other previous or future schedule formats. The SEC Athletics Directors will convene in Spring 2012 to begin formulating scheduling principles for the 2013 season and beyond.

"The SEC transition team and our athletic directors did a great job with significant logistical challenges in a short time frame in developing the 2012 football conference schedule," said SEC Commissioner Mike Slive. "The ability to come together for the conference is what makes the SEC so strong and that was evident yet again in this process."

"The 2012 football schedule has been a huge undertaking by the conference office," added South Carolina Athletics Director Eric Hyman. "Scheduling 13 teams was extremely difficult but when Missouri was released to join the conference at such a late date, scheduling 14 teams in a tight timeline was awfully challenging. Most schools had to make adjustments from their normal schedules in order to finalize the 2012 schedule."

The 2012 schedule is based on divisional play that started in 1992. Missouri will participate in the Eastern Division while Texas A&M will play in the Western Division. The conference schedule will remain at eight regular season games, with six games played inside the division and two games against teams from the opposite division.

The 2012 SEC Championship Game will be played on Saturday, Dec. 1, at the Georgia Dome in Atlanta.

The entire slate of 2012 conference games will be televised by one of the SEC's television partners - CBS Sports, any of the ESPN platforms (ESPN, ESPN2, ESPNU, SEC Network, ESPN3.com), CSS or FS South.