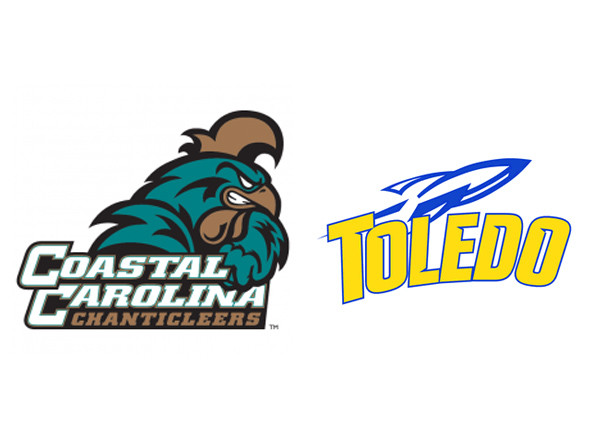 The Coastal Carolina Chanticleers (2-1) will make their longest trip away from Brooks Stadium in program history when they visit the Glass Bowl, home of the Toledo Rockets (2-1), Saturday night.

After surrendering their first loss of the season to Eastern Kentucky 35-17 last week, Coastal looks to bounce back against a mighty foe. Toledo is a member of the Mid-Atlantic Conference and is an FBS school. Over the past five meetings with an FBS school, Coastal has only been able to muster up 10 points. Toledo will certainly be a tough task for the Chants, but in their eyes, it is just another game. “We are going to go out this week, practice hard and take care of ourselves. We are just going to go out there and perform the best that we can and show people what we got,” senior running back Jeremy Height added during the mid-week press conference.

Toledo will be looking to test the injured Chanticleer defense with the threat of the long ball. Junior quarter back Terrance Owens has had an outstanding start to the season. Most recently against Bowling Green he threw for 303-yards on 20 completions. His favorite receiver was redshirt freshman wide receiver Alonzo Russell, who went for 152-yards on six receptions. Their biggest hook up of the game was a 66-yard touchdown to open up the game. The Rockets may try to target senior defensive back Tre Henderson who is still nursing a hamstring.

Coming off a career day with 10 receptions, tying the school record, junior wide receiver Niccolo Mastromatteo will be a game-time-decision after seeing limited reps during the past few days of practice.

This week Coach Joe Moglia was talking finance and football when he appeared on the Fox News program, "Your World Cavuto" and "CNBC Sports Biz: Game On!" airing on the NBC Sports Network. The Coastal Carolina athletic is also talking finance and football this week; they will be receiving $375,000 check for taking on Toledo. “Bottom line is, it is an opportunity to be able to play up, but there is a cost when you do that, there is a physical cost in affect you have to pay,” Coach Moglia added.

The Chanticleers will begin their journey out to Toledo late tomorrow evening, and will arrive around 9 p.m. in Ohio. Kickoff is set for 7 p.m. on Saturday night.