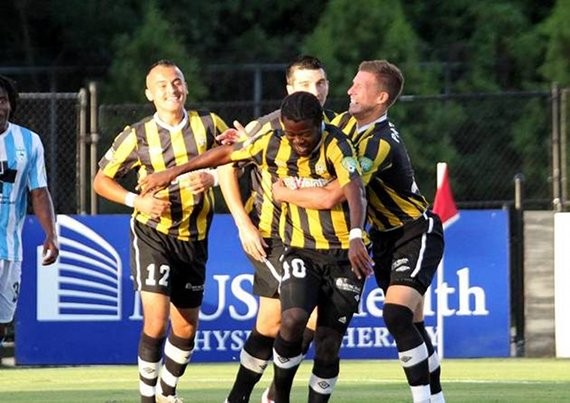 7:23 am on Saturday August 4, 2012 | Posted by Amanda Click
Charleston Battery still has shot at second after tie with Wilmington Hammerheads

Post-game update: The Charleston Battery tied the Wilmington Hammerheads 2-2 on Friday night at Blackbaud Stadium in front of 3,557 fans.

The Battery still have an opportunity to finish in second position which would allow Charleston a bye into the semifinal round and guarantee a home game in the playoffs.

Nicki Paterson and Taylor Mueller both recorded goals for the Battery but it wasn't enough to edge past the Hammerheads. With the draw the Charleston Battery will remain in third position three points ahead of Wilmington who occupy the fourth spot.

The Hammerheads opened up scoring late in the first half with a goal from forward Andres Cuero. In the 35th minute Wilmington was awarded with a free kick 40 yards out. The ball was flighted into the box and cleared to Cuero who blasted the deflection home past Battery goalkeeper Andrew Dykstra.

The second half started strong when the Battery's Tony Donatelli took a bicycle shot inside the six that was saved off the line by a Hammerhead defender.

Not long after, Navion Boyd placed a ball into Dane Kelly's feet at the edge of the 18- yard-box. Kelly flicked the ball onto Nicki Paterson who found himself free on the left side and fired a shot past Alex Horwath to tie the match up in the 50th minute.

The Battery found success again off a free kick that Paterson ripped off the crossbar. After several attempts Charleston's defender Taylor Mueller was able to capitalize with a one-time finish to record his first professional goal.

Wilmington's Steven Perry responded with a breakaway and slotted past Andrew Dykstra to even the score with minutes left.

In the 89th minute the Hammerheads were forced to play down a man when Chuck Rodriguez was ejected from the match.

The Battery squares off with the Hammerheads again tomorrow night at Legion Field, followed by a two game road swing. They conclude regular season play with a home match against the Dayton Dutch Lions on Saturday, August 18th at 7:30 PM.

First reporting: Soak in some professional soccer this weekend and catch the Charleston Battery game versus the Wilmington Hammerheads.

On Friday night the Battery will play the Hammerheads at Blackbaud Stadium with kick off set for 7:30 p.m.; then on Saturday both teams will head to Wilmington, N.C. for the second match and final game of the three-game season series.