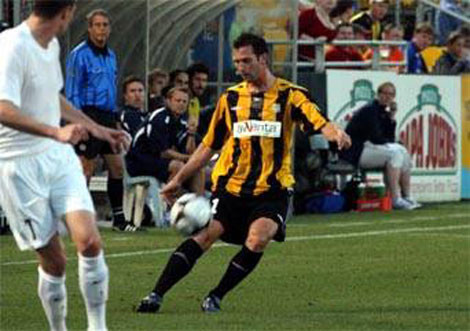 The Charleston Battery will play its fourth game of the season on Saturday, May 2, in Miami as it takes on the Miami Blues.

Read more stories on this subject in our Charleston Battery topic page.The Battery is still looking for their first win of the season after their first three games ended in ties.

The game starts at 8 p.m. Watch it at USLLive.com or listen at Sports Radio 1450 AM.

Here's the full game preview from an e-mailed release:

The Charleston Battery plays its fourth game of the USL First Division season Saturday night in Miami, Fl (May 2) as it takes on the Miami, FC Blues (8:00 PM, Sports Radio 1450 AM / USLLive.com). The Battery is still looking for its first win of the season after tying the first three games of the year. The Battery defense, anchored by veteran goalkeeper Dusty Hudock, has been rock-solid allowing just one goal in 270 minutes of play.

The game will be played at Lockhart Stadium in Fort Lauderdale; Miami FC is using several stadiums for its home games in 2009 including FIU and Lockhart. Lockhart is the former home of Major League Soccer’s Miami Fusion and also the NASL Fort Lauderdale Strikers.

The Battery enters the weekend still looking for its first win of the season but is also still undefeated after three consecutive ties. After scoreless draws versus the Vancouver Whitecaps and the Montreal Impact the Battery fought back to a 1-1 tie last Friday night versus the Minnesota Thunder.

The Thunder took the lead in the 6th minute from a corner-kick. Charleston responded with a goal from a penalty-kick later in the first-half after Tsuyoshi Yoshitake was felled in the box. Yoshitake converted the penalty to record Charleston’s first goal of the year.

Forward Randi Patterson, who came on as a substitute in the 63rd minute looked to have scored a winner late in the game but his headed goal was called back for offside.

Charleston Battery head coach Mike Anhaeuser should have midfielder Tyler Hemming available for selection Saturday after a one-game absence with a hamstring injury. The only other absentee is Jamaican defender O’Brian Woodbine who continues his recovery from a foot-injury sustained during pre-season.

Last year the Battery and Miami played three games with each side winning once plus one tied game. Miami missed the playoffs in 2008 for the second year in succession after making the post-season in 2006.

Miami is led by second-year head coach Zinho, a former Miami FC Blues player whose career as a player including winning the World Cup with Brazil in 1994. Zinho made 57 total appearances for the Brazilian national team.

Miami has played three games thus far winning twice and losing once. After opening the season with a pair of wins versus the Cleveland City Stars and the Montreal Impact the Blues lost 2-1 last Sunday to the Rochester Rhinos; all three games were played at home.

Miami has not failed to score in any of its 2009 games with forward Diego Serna and midfielder Inacio Nunes leading the way with two goals apiece.

Watch or listen live
The game on Saturday night is available locally via Sports Radio 1450 AM with the pre-match broadcast starting at 7:45 PM. The game is also available via a live video feed at USLLive.com.

Battery next home
The Charleston Battery plays three consecutive games on the road (05/02 vs Miami FC Blues / 05/09 vs Carolina RailHawks / 05/15 vs Montreal Impact) before returning to Blackbaud Stadium for its next home match on Wednesday, May 20 versus Miami FC Blues (7:30 PM, $10 - $18, 971-GOAL / charlestonbattery.com).

Tsuyoshi Yoshitake honored for second week
Charleston Battery midfielder Tsuyoshi Yoshitake has been named to the USL First Division team of the week for the second consecutive week after a strong performance in last weekend’s game versus the Minnesota Thunder. Yoshitake earned a penalty in the 38th minute then converted it to register the Battery’s first goal of the season and earn Charleston the tie.