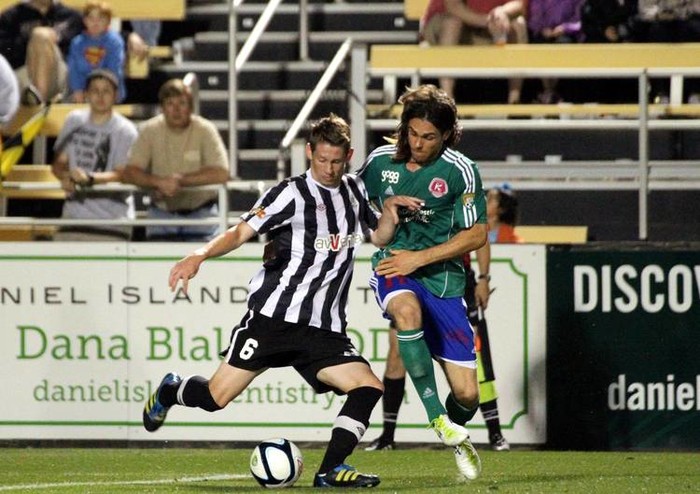 2:30 am on Sunday April 15, 2012
Charleston Battery falls to Richmond Kickers in home opener

On Saturday, the Charleston Battery played their 20th home opener — but the Richmond Kickers defeated Charleston's home team by a score 2-1 at Blackbaud Stadium with an attendance of 4,729.

Sascha Goerres was credited with the game winner in the 90th minute when his long-range strike deflected past Battery goalkeeper Andrew Dykstra.

"I think overall we played well, we probably deserved three points and we should have at least gotten a point out of that game," said Battery Head Coach Mike Anhaeuser "I give Richmond credit, they took advantage of a bad bounce and got the three points."

The Battery opened the scoring in the 18th minute when Ryan Richter picked out Nicki Paterson with a square pass at the top of the box. Paterson blasted a one-time shot past Richmond goalkeeper, Ronnie Pascale into the far left corner of the net.

In the 65th minute Stanley Nyazamba evened the score when the Richmond Kickers were awarded a penalty kick for a take down in the box.

The deciding goal came in the 90th minute after Sascha Gorres struck from long –range. The ball took a heavy deflection on the way through and found the back of the net.

The Charleston Battery's next game is Tuesday, April 17, when they head to Charlotte to battle the Eagles at 7 p.m.