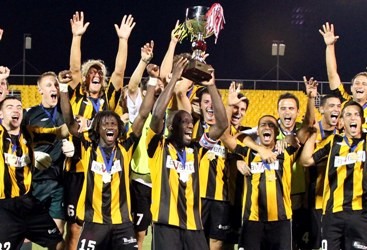 Update August 29: The Post and Courier has added their own write-up, which is most notable for its pairing with a nice photo gallery.

First reporting August 28: The Charleston Battery have rounded out their season in grand fashion, beating the Richmond Kickers 2-1 before 4,523 at home in Charleston.

Below is the full report on the game, and Live 5 News has some nice video clips.

A ten man Battery clinched the USL-2 title with a hard-fought 2-1 win against the Richmond Kickers Saturday night at Blackbaud Stadium in front of 4,523. USL-2 MVP Lamar Neagle and Battery midfielder Ian Fuller supplied the goals as Charleston won its third USL championship.

“To beat them we knew it was going to have to be a battle, but the guys played strong and everyone on this team deserves to be a champion,” said Head Coach Mike Anhaeuser. “To score a goal after losing a man was fantastic and they defended with 100% commitment to hold on for the win.”

Charleston’s first chance of the evening came in the 23rd minute from Battery winger Stephen Armstrong. Armstrong struck a powerful cross from the far right side of the field looking to meet the feet of forward Lamar Neagle, but the cross proved just too far wide for Neagle to get a quality strike away.

Minutes later, Battery midfielder Mike Zaher took the corner that put the Battery ahead by one goal. The ball came in to Ian Fuller who fired a shot at goal. Forward Tom Heinemann cushioned the strike and flicked the ball to Lamar Neagle who buried his chance from three yards out.

With the man advantage Richmond fought back and came close in the 48th minute with a cross from defender Sasha Gorres to teammate Matt Delicate. Delicate finished with a powerful shot but Charleston goalkeeper Tim Melia was well placed to make the save.

Charleston doubled its advantage with a second goal in the 52nd minute. Zaher found Heinemann in the box from a throw-in and Heinemann just managed to flick the ball on to Ian Fuller. Fuller held off his defender and smashed the ball home with a spinning volley.

Richmond replied in the 70th minute after a perfect cross from Gorres found Edson Elcock at the back post. Elcock hit a first time strike that flew past Melia into the top right corner.

With momentum swinging towards the Kickers the Battery hung on with some resolute defending. Delicate had a chance to tie the game in stoppage time but his dipping volley was headed off the line by Fuller and away to safety.

This was the Charleston Battery’s third USL Championship; the Battery won the USL-2 title in 1996 and the USl-1 title in 2003.