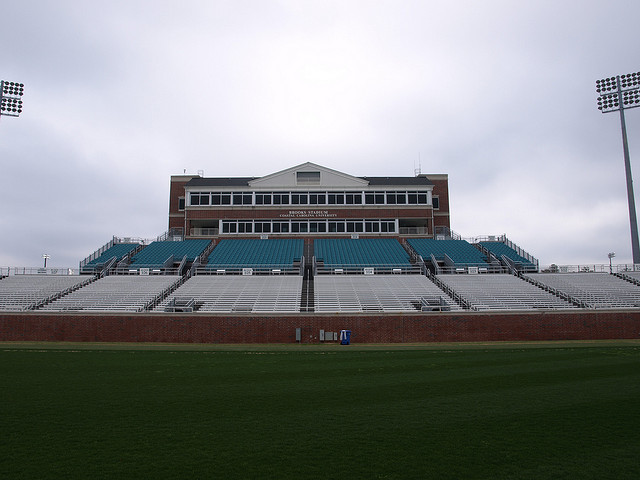 5:44 am on Sunday September 30, 2012 | Posted by
Chants fall to Appalachian State in final non-conference game

Against their final non-conference opponent of the season, the Coastal Carolina Chanticleers (2-3) fell to the Appalachian State Mountaineers (3-2) 55-14.

The 17th ranked Mountaineers came right out of the gate swinging as they scored on three of their first four drives. On their first drive App drove 65-yards in nine plays ending with a Jamal Jackson 5-yard quarter back keeper touchdown. Two possessions later Jackson hooked up with sophomore Sean Price for a 69-yard touchdown pass. This marked Price’s fourth touchdown of the young season. ASU’s final drive of the first quarter ended with a 23-yard touchdown pass from Jackson to Drew Bailey, giving them a 21-0 lead.

Coastal started to show some life late in the first half as Aramis Hillary capped off a nine play 75-yard drive with a 2-yard pass to Dave Duran brining CCU within 17 points. This was Duran’s first appearance since the Furman game after suffering an injury on an on-side kick.

It was all Mountaineers in the second half, starting with their first play from scrimmage; senior Steven Miller rushed 75-yards in for the touchdown putting App up 41-14. Miller had a monster ball game finishing with 202-yards on 17 attempts and adding two touchdowns along the way.

A notable presence missing on the offensive side of the ball for the Chanticleers was junior wide receiver Niccolo Mastromatteo. After missing last week’s game versus Toledo with a rib injury, Mastromatteo was a game time decision going into Kidd Brewer Stadium and ended up not playing.

When the dust finally settled Coastal’s defense surrendered 684 total yards, the most in CCU history, pushing aside Penn State’s 594-yards in 2008. With this loss, Coastal moves to 4-8 all time versus a ranked FCS opponent. This also marks Appalachian State’s 16th straight win over a big south opponent.

Some well needed rest for the banged up Chanticleers will be taken advantage of during next week’s bye week. Coastal will have two weeks to prepare for Stony Brook (4-1) who defeated Army 23-3 today.