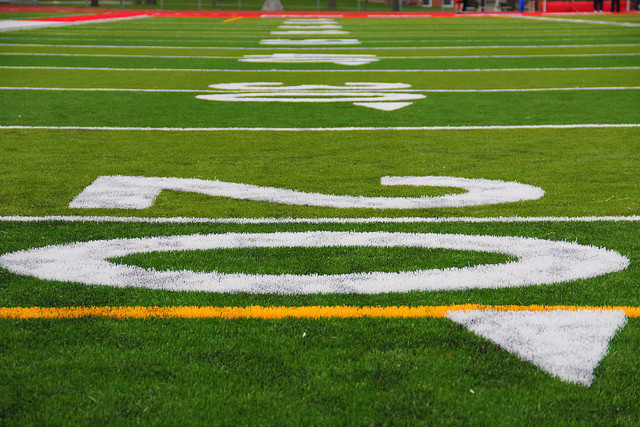 Toledo, Ohio— The Coastal Carolina Chanticleers (2-2) fell to the University of Toledo, their only FBS opponent of the year, 38-28 Saturday night at the historic Glass Bowl.

The Toledo Rockets held off the Chanticleers upset bid that lasted late into the second half. Not many people gave Coastal a shot in this game, the final spread was over 30 points. But, as mentioned in the mid-week press conference, the Chants would be playing this week as if it was any other opponent and they certainly stuck to that plan.

Aramis Hillary came out firing the ball to a career game in pass yards, finishing with 356-yards. This marked Hillary’s first 300-yard game and 3rd best in school history. Hillary also set the school record for completions with 30. DeMario Bennett and freshman Tyrell Blanks both had big games with a touchdown a piece.

In the first drive of the second half Coastal drove 75-yards down the field in six plays to give them their second lead of the ball game 21-17. The lead didn’t last very long as the Rockets went on to score 14 unanswered points.

A fourth quarter Toledo fumble gave a glimpse of hope to the Chants as it led to a 17-yard Hillary to Blanks touchdown pass. This pulled the Chants within three points with less than eight minutes to go in the ball game.

A play action pass from Terrance Owens, junior quarterback out of Cleveland, silenced the CCU defense as he connected with Cordale Scott putting Toledo back up for good, 38-28.

The Chanticleer Sports Network caught up with Coach Moglia shortly after the game, “I do think we played better today than we did a week ago, and I do think we are getting better as a team, we just still have a ways to go.”

Coastal now drops to 0-6 all-time versus FBS opponents. This was by far the best showing the Chanticleers have put on versus an FBS team. In the past five games CCU has only been able to put up 10 points, tonight they nearly tripled that. “I thought our guys played hard, our guys didn’t come up here hoping we were going to win, our guys came up here with an attitude like we are going after this and give it everything we had.”

Coastal will look ahead to their next opponent, Appalachian State (2-2) who defeated Chattanooga 34-17 Saturday night.