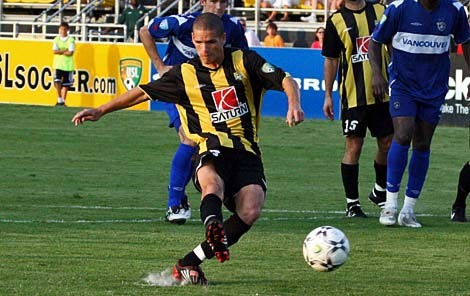 5:47 pm on Sunday August 3, 2008 | Posted by Ken Hawkins
Battery back at top after blanking Vancouver Whitecaps

Image by Charleston BatteryImage by 20080803battery.jpg Osvaldo Alonso scored twice against the Whitecaps on Sunday.

The Charleston Battery's Web site has a solid write-up of the game, saying in part:
Following a string of superb midseason home performances, the Battery had sat alone—by as much as six points—atop the standings. But the Charleston outfit had since struggled on the road, picking up a lone point—against the Whitecaps in Vancouver—in its last three games.

But the Battery began tonight's game with plenty of intent, calmly stroking the ball around in midfield and forcing in a few dangerous crosses from the left flank. Midfielder Alonso was particularly menacing through the middle, and in the 10th minute his tenacity paid off.

Past game results are available on the Battery Web site.

The Battery's next game is Thursday (August 7) away against the Minnesota Thunder.

Charleston's team plays in the US Open Cup semifinals on August 12 here in Charleston.