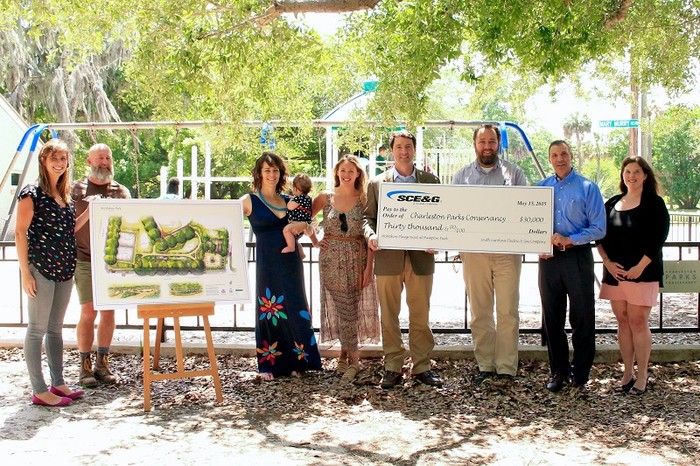 Fundraising for a renovated playground and green space at McMahon Playground at Hampton Park received a major boost this month with a $30,000 donation from SCE&G.

Neighborhood residents and the Conservancy have hosted fundraisers for a new playground layout and equipment, and SCE&G’s donation will allow for garden areas, pathways, shade trees and benches in the now-vacant space near the playground along Cleveland Street. With SCE&G’s contribution, the Conservancy, the community and the city have raised nearly $77,000 for this project and have just over $23,000 left to raise to reach their goal for the project.

“We are very pleased to be a part of this renovation project at Hampton Park,” said SCE&G Vice President of Customer Relations and Renewables Danny Kassis. “The shade trees, benches and landscaping will not only beautify the space next to the new playground, but we believe it will help attract even more people to the open space that has been a treasure of the City of Charleston for many years.”

Conservancy Executive Director Harry Lesesne added, “We are incredibly grateful to SCE&G for their commitment to Hampton Park. Their donation will enable the creation of a beautifully restored new space that will be enjoyed by children and families for decades to come.”

The Conservancy is happy to accept additional donations for the project, which is slated to begin later this year. To make a donation or learn more about the project, visit www.charlestonparksconservancy.org.