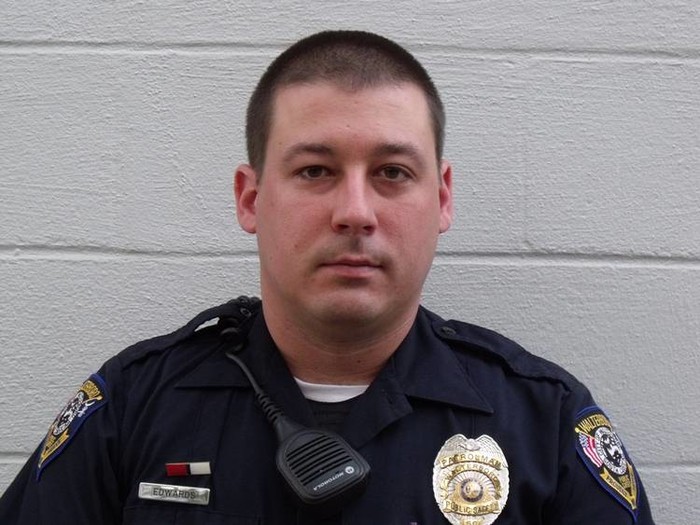 Walterboro, S.C. – At the City of Walterboro Council meeting on March 22, 2011, Mayor Bill Young presented Walterboro Public Safety Officer Jon Edwards with the South Carolina Police Chief Association’s Life Saving Award. Officer Edwards was recognized for his situational awareness and quick action, which saved the life of a Walterboro resident and his dog.

On March 7, 2011, Officer Edwards was dispatched to Peachtree and Sherwood Drive in response to a possible fire. Upon arrival, Officer Edwards observed a considerable amount of flames coming from the rear of 109 Sherwood Drive. After investigating further, he noticed a vehicle parked along the front of the property, which prompted Edwards to conduct a search for occupants, despite the fact that the property was condemned and should not have been occupied. After knocking and announcing his presence, he received no response, but as he continued to knock, he heard a faint voice in response, followed by coughing.

Upon hearing the sound of life trapped inside, Officer Edwards entered the structure, without protective fire gear. As he walked in, a wall of heavy smoke pushed downward to approximately two feet from floor level. Officer Edwards began calling out to the individual to try and locate him. After finding the victim, Officer Edwards brought him to safety, even though he was considerably larger than Edwards.

During the rescue, the victim informed Officer Edwards that his dog was still inside. Officer Edwards then re-entered the structure, located the dog, and helped it to safety as well. Once the fire engine arrived, Officer Edwards deployed a hose line and began the initial exterior attack on the fire, continuing in his role of protecting both people and property.

“The gentleman and his loyal companion were saved from the fire, thanks to the heroism of Officer Jon Edwards. The City is fortunate to have someone of his character, sense of urgency and commitment to the role of keeping Walterboro and its citizens safe from harm,” said Mayor Young.

Edwards has been with the city since July 1, 2010, and resides in Walterboro.

Established in 1826, the City of Walterboro is hailed as the “front porch of the Lowcountry,” with its historic charm, plentiful natural resources and warm Southern hospitality. The area around the city, rich with forests and vast quantities of water, is also known as the gateway to the ACE Basin, one of the largest undeveloped estuaries on the East Coast. Centrally located between Charleston, Savannah, Hilton Head, and Columbia, the city is home to many historic buildings, antique stores, the Great Swamp Sanctuary and the S.C. Artisans Center, designated by the state’s legislature as the “Official South Carolina Folk Art and Craft Center.” In addition, the city is home to the largest general aviation airport in the state. Walterboro serves as the economic heart of Colleton County and maintains a small-town Americana atmosphere. For more information, call 843-549-2545 or visit www.walterborosc.org.