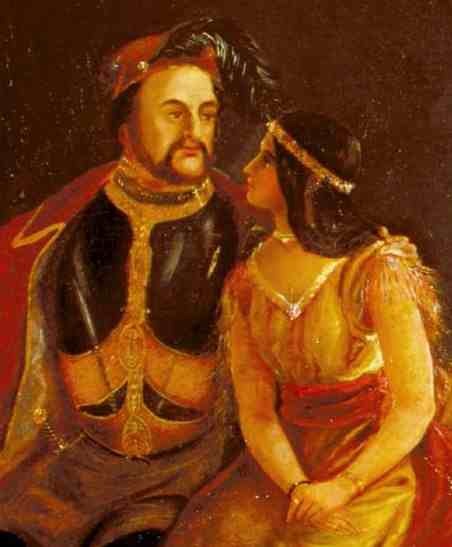 Notes on Quotes-Pocahontas: From Captive to First Lady

“Pocahontas is one of those historical characters who comes across to us eternally embalmed in some legend rather than a person in her own right and in her own humanity.” Noel B. Gerson

Charles Towne (Charleston) was founded in 1670 and was named after King Charles ll of England. English colonies became a much greater priority after Pocahontas met with King James and Queen Anne in London in 1617. Her great impact on all of early Colonial America has not been adequately examined. Pocahontas is with her husband, John Rolfe, in the displayed painting.

Pocahontas (Matoaka) is much like King Arthur in that at each retelling, the story changes. Popular legend tells of Pocahontas imploring Chief Powhatan, her father, to spare the life of Captain John Smith, who was supposedly on a stone slab about to be beaten by many men with clubs. Pocahontas then threw her body over Smith, and he was saved. Accounts also say she brought food to the hungry Jamestown colonists and was romantically linked to Smith.

A more realistic understanding of Pocahontas may lie in her tribe’s oral history. “The True Story of Pocahontas,” by Dr. Linwood Custalow and Angela L. Daniele is based on Native American oral traditions, which have Pocahontas around10 years old when colonists arrive in 1607 to begin the first permanent English settlement. This is consistent with early English writings which mention Pocahontas playing with colony children and makes her too young for a romantic liaison with John Smith. Smith made no claim of romantic involvement with Pocahontas.

Did Pocahontas, daughter of Chief Powhatan, save Captain John Smith’s life?  Smith was captured by Indian hunters in the Chickahominy River area. A deal was struck and Smith was put through a ritual indicating his loyalty to the Powhatan hierarchy. The ritual may have been frightening and he may have feared death, but his early writings did not mention a death threat or Pocahontas. The story of Pocahontas saving his life only appeared in his writings after Pocahontas gained prominence in England. Smith’s account of a fair maiden saving his life in Hungary, under similar circumstances, made historians even more skeptical of his story.

Surely the story of Pocahontas bringing food to starving colonists is true. Alas, oral history tells us that a wide river stood between her and the colonists. She probably visited in expeditions her father authorized but never brought food herself.

Who was the real Pocahontas? War was developing between the colonists and the Virginia Algonquian-speaking Indians. Pocahontas was kidnapped and held hostage to prevent further attacks. At this time, she was married to an Indian warrior named Kocoum. Chief Powhatan met terms for her release but the colonist’s government would not release her and began to educate Pocahontas in the English language, customs and Christianity. Chief Powhatan was in a dilemma as Indian custom held that he could not begin war for personal reasons and recapture his favorite daughter.

Pocahontas met and married John Rolfe, converted to Christianity and moved to John Rolfe’s tobacco plantation in 1614, where she helped him with her knowledge of tobacco cultivation. They had one child, Thomas Rolfe. There is some evidence their relationship was a case of real love but it was also a political liaison, which brought temporary peace between the colonists and Powhatan Indians.

The Jamestown colonists were struggling. They could not get enough settlers, supplies or investments to the colony. The gold that had sustained Spanish colonies was not present in Virginia. The colonists, unprepared for subsistence farming, were dependent on the Indians for food. Pocahontas and John Rolfe left for England to gain investors and convince the English Crown to be more supportive.

Pocahontas was emerging as First Lady of the colonists with royal standing in her own right through her father, who the English considered a king; although, Powhatan lines of succession differed. In England she met with King James and Queen Anne and many said she “carried” herself as the daughter of a king. She dressed in fine European clothes but refused the traditional wig and accepted but did not care for high heels.

Extremely popular, she effectively represented colonists as well as her Indian heritage. Investors began to step forward and people of all classes wanted to go to Virginia. The Jamestown and surrounding areas would survive and thrive. In 1617 as her ship was leaving England for Virginia, Pocahontas died very suddenly. The cause of her death is unknown and speculation ranges from pneumonia to poisoning.

We were left with the impression of a courageous woman, who perhaps hid her deepest feelings and thoughts. She lived in a world of political intrigue, fighting and suffering but handled it all with dignity. As a force for harmony, honesty and integrity between the two cultures, her life will always inspire.

Gordon Mercer is past president and on the Board of Trustees of Pi Gamma Mu International Honor Society and professor emeritus at Western Carolina University. Marcia Gaines Mercer is a published author and columnist. They were married in Charleston and have a place in nearby Garden City, South Carolina.