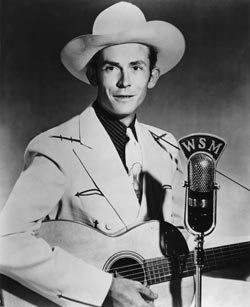 “Hear that lonesome whippoorwill? He sounds too blue to fly. The midnight train is whining low, I’m so lonesome I could cry.” Hank Williams

Hank Williams put county music on the map and records show he was last interviewed in Charleston, South Carolina on March 2, 1951. Hank’s music has been called country, gospel, folk, blues and hillbilly. Hank Williams said he was just writing and singing the only music he knew. Writing songs like “Lovesick Blues,” “Why Don’t You Love Me,” “Cold Cold Heart” and “I Saw the Light,” he sang about sorrow and joy. On a trip to Montgomery, Alabama recently we attended Hank’s birthday celebration at the Hank Williams Museum. We found that each new generation rediscovers Hank Williams. His fans think of his music as pure music, arising from heart and soul. We found Hank Williams' fans are the nicest people.

September 17, 2012 would have been Hank’s 89th birthday. The Hank Williams Museum houses Hank’s light blue Cadillac convertible, where he had his fatal heart attack at 29. We talked with Charles Carr, then a young college student and family friend, who was driving when Hank died. Carr, his youthful good looks still evident, told us it was snowing on the final trip and that Hank’s mind was at ease about the upcoming performance. He remembered Hank singing in the car. Hank’s last song was Red Foley’s, “Midnight.” Carr emphatically agreed with medical authorities that a heart attack was the cause of Hank’s death. Contrary to rumor, he indicated there was no scrap of paper left in Hank’s car with a scribbled unfinished song. When we asked him if he was sure, he raised his hands expressively before looking down and said, “I was there.” Carr’s deep sadness at the memory was evident.

Hank began performing live on local radio and landed his own 15 minute local radio show. This led to performances in surrounding communities. With Hank’s increasing fame, he linked up with Fred Rose of Acuff-Rose Music and gained a contract with radio station KWKH.  Rose became Hank’s manager, landing Hank recording contracts with MGM Records and later a position with the Grand Ole Opry.

Numerous hits followed, including “Cold Cold Heart” and “I Can’t Help It (If I’m Still in Love With You).” Women screamed when he sang and performances were sold out.

As success hit hard and fast, Hank’s marriage to Audrey Sheppard was failing. In chronic back pain, Hank had a severe drinking problem. He became increasingly dependent on pain medication and too frequently missed performances. He was fired from the Grand Ole Opry and Fred Rose, his manager, dropped him as his career began to slide. His second marriage to Billy Jean Jones also began to fail.

Despite heart problems, he and friend and driver Charles Carr started out for performances in Charleston, West Virginia and Canton, Ohio. Hank suffered a fatal heart attack on January 1st 1953 on his way to do what he loved.

Music was playing as we left the museum. It was David Allan Coe’s song about a ghostly Hank in his Cadillac giving a ride to an aspiring young singer. “Drifter can ya make folks cry when you play and sing? Have you payed your dues, can you moan the blues? Can you bend them guitar strings? Boy, can you make folks feel what you feel inside? Cause if you’re big star bound let me warn ya, it’s a long hard ride.”

Did Hank have a premonition? During the period before he and Charles Carr drove out of Montgomery, Hank visited all of his primary relatives. Hank’s last recorded song before his death was, “I’ll Never Get Out of This World Alive.”

Dr. Gordon Mercer is past president and on the Board of Trustees of Pi Gamma Mu International Honor Society and professor emeritus at Western Carolina University. Marcia Gaines Mercer is a published author and columnist. They were married in Charleston, South Carolina and have a place in nearby Garden City, South Carolina.