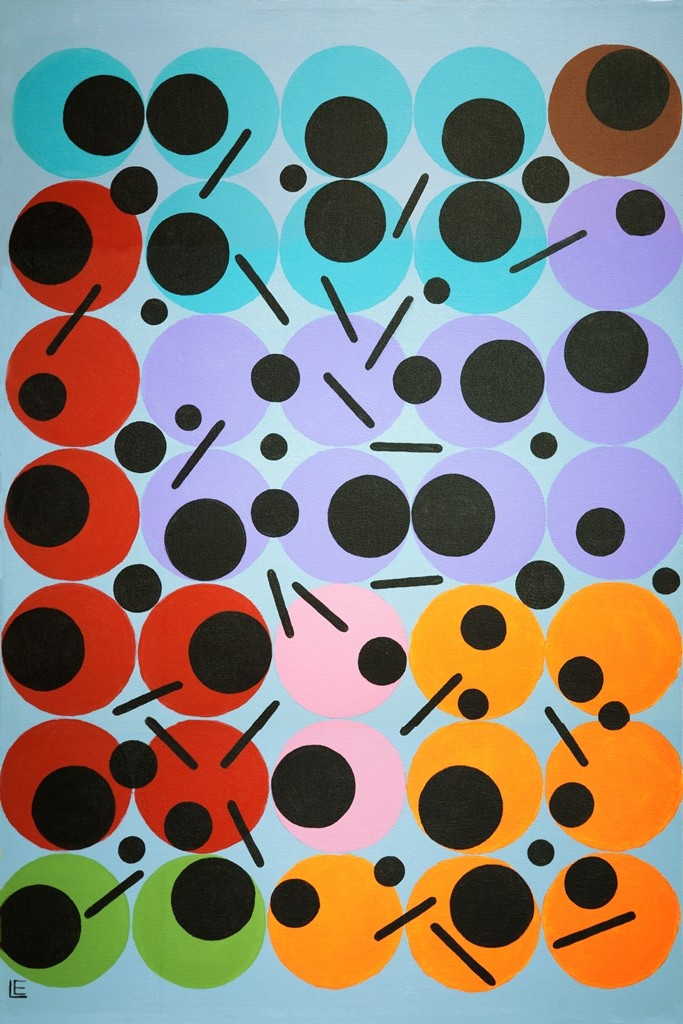 According to Elksnin, A Train is her attempt to capture the color and movement of jazz. “The painting is titled in honor of Duke Ellington, whose orchestra made the Billy Strayhorn standard, Take the ‘A’ Train, its signature tune,” she explains. When asked why she felt the piece was appropriate to submit for the competition, the artist replied, “I believe A Train captures the excitement of the North Charleston Arts Festival. It depicts the interconnectedness of the people involved in the event – the visual and performing artists, the audience, and the festival organizers.”

Born in Pennsylvania, Elksnin’s passion for art began in elementary school when she took classes at the Philadelphia College of Art. After receiving her BFA in Illustration from Syracuse University, her career path took a different turn when she taught art to children with disabilities. After earning master’s and doctoral degrees in special education from the University of Virginia, Elksnin came to The Citadel to coordinate the special education graduate program. She retired in 2006 as Professor Emerita and returned to painting full time at her home in Mt. Pleasant, South Carolina. The inspiration for many of her works comes from eclectic sources such as textiles, self-taught and outsider artists, as well as mainstream artists such as Mark Rothko and Romare Bearden. Whether abstract or loosely based on reality, the common thread of all of her pieces is color and graphically pleasing design.

Linda’s work has been shown throughout the southeast in galleries and at juried art shows and festivals. She was awarded Honorable Mention for the Cooper River Bridge Run Poster Design Contest in 1998, as well as the Art in the Park Juried Outdoor Exhibit in Blowing Rock, NC, in 2008. Most recently, her work was selected for an Award of Merit at the Art Market at Honeyhorn in Hilton Head, SC, and as the official poster image of the 2012 Piccolo Spoleto Festival Poster Design Contest.

An exhibition of Linda’s work will be on display at the North Charleston City Gallery throughout the month of May. The gallery is located within the Charleston Area Convention Center at 5001 Coliseum Drive in North Charleston. Gallery hours are 9:00am-5:00pm daily and admission and parking are free. The public is invited to meet the artist at the gallery on May 4 and 5 during the Main Event of the North Charleston Arts Festival. T-shirts and posters featuring the winning design will be available for sale.

For more information about the North Charleston Arts Festival, or other competition and exhibition opportunities, contact the City of North Charleston Cultural Arts Department at (843)740-5854, email culturalarts@northcharleston.org, or visit NorthCharlestonArtsFest.com. To see more of Linda Elksnin’s work, visit LindaElksninArt.com.