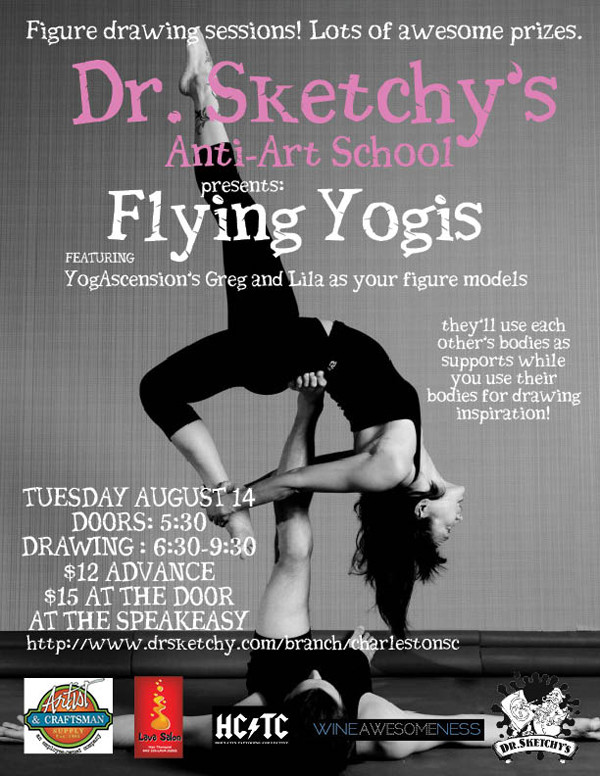 The Charleston branch of Dr. Sketchy’s Anti-Art School will hold its next event, Dr. Sketchy’s Flying Yogis on Tuesday, August 14, 2012 at the Speakeasy on East Bay Street. The theme of this three-hour drawing class is “use each other’s bodies” (more on that later). Artist & Craftsman, Lava Salon, Wine Awesomeness and Holy City Tattooing Collective are the evening’s sponsors.

What in the world is Dr. Sketchy’s Anti-Art School? Dr. Sketchy’s has been dubbed the world’s premiere alternative drawing movement where underground performers take over uninteresting figure drawing classes. Out of a small bar in Brooklyn, the first Dr. Sketchy’s was born in 2005. Today, there are over 100 branches in cities all over the world. Olivia Pool opened the Charleston branch in September of 2011.

This session’s models will be Greg and Lila of the acro-yoga duo, YogAscension. Acro-yoga is the mixed practice of yoga, acrobatics, and the healing arts. YogAscension will be using each other’s bodies to move and fly through the air, as the audience uses the yogis’ bodies to create artistic masterpieces.

“We are really excited for the opportunity to combine the performing and visual arts with Dr. Sketchy’s,” said Olivia Pool, the director of Dr. Sketchy’s in Charleston. “The class is a fun and different approach to a typical figure drawing class. It is fun, fresh, and rather sexy.”

Seating is limited and artists are encouraged to arrive early for the best seats. Please come with your own drawing and/or painting materials. Non-artists are also welcome to join in the fun!  Doors will open at 5:30 pm and the class will begin promptly at 6:30 pm and go until 9:30pm. This class will take place in a bar and attendees must be at least 21 years of age. Tickets for the event are $12 in advance online or $15 at the door (if not already sold out). Tickets can be purchased online from the Dr. Sketchy’s website: www.drsketchy.com/branch/charlestonsc. For more information, contact Olivia Pool at 843.568.7738 or visit the Dr. Sketchy’s Charleston page on Facebook.

Head to the source at charlestonsc