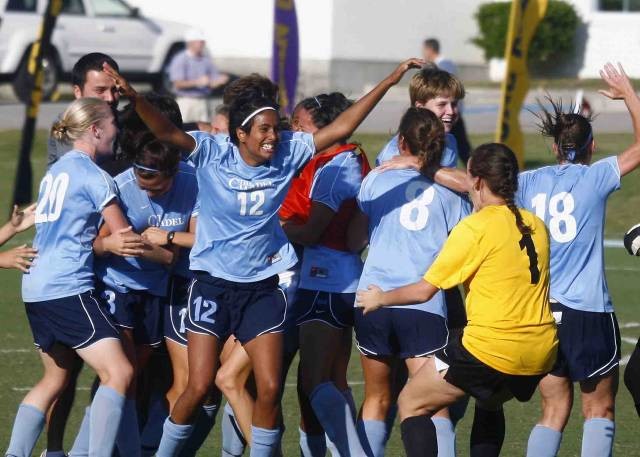 Image by The Citadel

After a record-setting season for the team, The Citadel's lady Bulldogs soccer team has won their first game in the Southern Conference tournament. It was also their first tournament game to ever play.

While Elon manage to knock out the College of Charleston, The Citadel hung in with a 2-1 victory by overtime free kicks to best Furman.

Citadel Sports has a write-up from the game.

The Citadel will take on Samford in the semifinals at 7:30 p.m. Friday, November 5, in North Carolina.

Update November 5: Today's another big day for the team as the No. 3 team prepares to face No. 2 Samford in the semifinal round of the Southern Conference Women's Soccer Tournament on today, November 5, at 7:30 p.m. in Cullowhee, N.C. The winner will advance to the conference championship match against the winner of UNC Greensboro and Elon on Sunday.

But The Bulldogs will be without head coach and two-time SoCon Coach of the Year Bob Winch on the sidelines after receiving a red card in last Sunday's thrilling double overtime win against Furman. Assistant coaches Jamie Stewart and Enrique Rodriquez will take over and guide the Cadets during the match in hopes of advancing to the finals.

If you want to know more about the leadup to today's match, check out this preview at Citadel Sports.

Update November 6: The Citadel was unable to withstand Samford and has fallen 4-3.

Samford fought back from a two-goal deficit to win the match in the final minutes. With less than four minutes left in regulation, Lindsay Matern centered a pass to Shanika Thomas whose shot hit the net just under the cross bar to give Samford the 4-3 lead. In one final effort to extend The Citadel's season, Nicole Levermann took a quick shot from long range with 31 seconds left in regulation, but the shot went wide giving Samford the match victory.

You can check out a full write-up on the game at Citadel Sports.