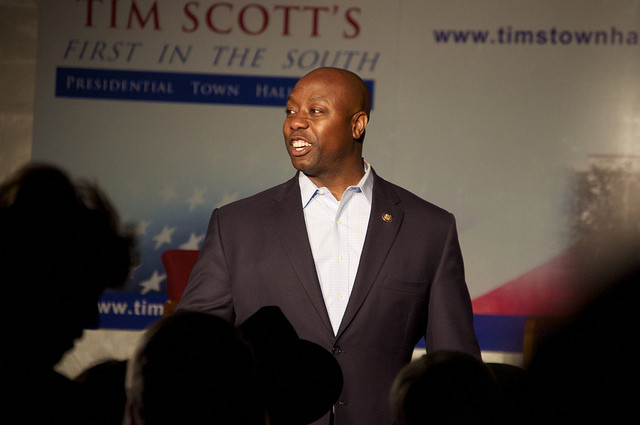 Haley announced today at the State House that Scott will fill the seat until the 2014 election, making him the "first African-American Republican to serve in the U.S. Senate in more than three decades."

Scott, who has represented South Carolina's 1st congressional district since 2011, will become the first black Republican to serve in the U.S. Senate since Edward Brooke (R-Mass.) left his seat in 1979. He will also be the state's first African American senator since the 19th century, as well as the only African American in the Senate.

via The New York Times

Ms. Haley seriously considered a number of potential contenders, particularly Jenny Sanford, the ex-wife of former Gov. Mark Sanford, who supported Ms. Haley in her race two years ago. But in choosing Mr. Scott, she selected a lawmaker with a strong conservative voting record during his two years in Congress.

There was a rush to report the news first, as there always is, but fellow S.C. politician, Congressman Joe Wilson seemed to have rushed through a poster/tweet he (or his staff) made for Mr. Scott that had more than one misspellings.

We at TheDigitel still think Colbert was the only man for the job...

Update December 12, 2012: The short list has been leaked and on it is Jenny Sanford, not Mark.

According to the Mudflats article, Jenny:

remains widely beloved and respected in her state. Her political skills are formidable, her Republican credentials solid, and her party is in dire need of prominent female faces. She’s likeable, and even gets on charmingly with urban, left-leaning smartypantses like Jon Stewart

The other choices include Representatives Tim Scott and Trey Gowdy, as expected. Added to the mix are Katherine Templeton and Henry McMaster. To read more, go to the WBTW site to see the Associated Press article.

Update December 10, 2012: Despite Haley putting the smackdown on Colbert taking over DeMint's seat, the S.C. native is polling the highest.

Colbert is seeing poll numbers at 20% followed by probable favorite Congressmen Tim Scott at 15%. According to the Huffington Post these poll numbers might not be enough to sway Governor Haley:

Although he's the top pick overall, Republicans are not as fond of the Comedy Central host. Among Democrats, he polled at 32 percent, but among Republicans he does not hit double digits.

The most interesting twist in the "who'll take DeMint's seat" saga is the reemergence of former Governor and international lover Mark Sanford as a possible pick by Haley or running in 2014.

Update December 7, 2012 3:41pm: It's a bad day in South Carolina for supporters of Stephen Colbert to take over DeMint's seat in the Senate.

Haley took to her Facebook (as she is wont to do regarding major policy) to put the kabosh on her picking Colbert as the replacement.

The Colbert Report Stephen, thank you for your interest in South Carolina's U.S. Senate seat and for the thousands of tweets you and your fans sent me.

But you forget one thing, my friend.

Additionally, in the new regarding the seat up for grab, Haley says she won't appoint herself or run for the seat in 2014.

Update December 7, 2012: Well that didn't take long. Stephen Colbert joked about how he's a perfect fit to take Jim DeMint's Senate seat, but was it really all comedy?

There's already a @ColbertforSC Twitter account where he proclaims to be "reporting for duty."  For more, you can check out this MSNBC.com article.

First report: South Carolina's Republican Senator Jim DeMint announced today that he will be resigning in January to become the next president of the conservative research group,The Heritage Foundation, based out of Washington, D.C.

"I'm leaving the Senate now, but I'm not leaving the fight. I've decided to join The Heritage Foundation at a time when the conservative movement needs strong leadership in the battle of ideas,” DeMint said in a news release.

I'll point you toward this article in today's Washington Post for more coverage.