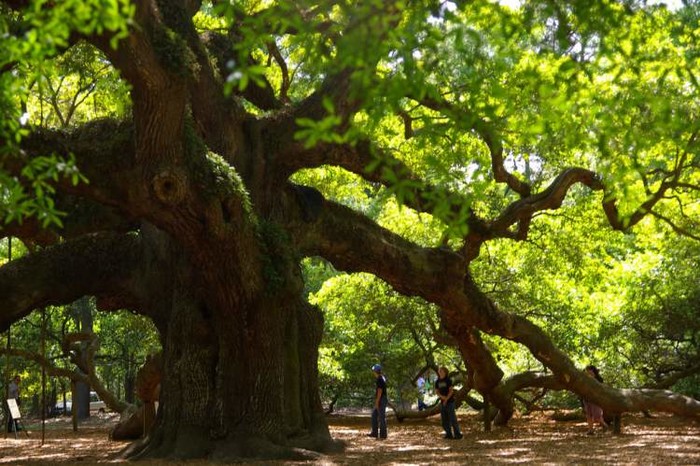 Image by Ken Hawkins/TheDigitel The tree is believed to be some 1,400 years old.

Update September 15: Charleston City Council has given final approval for the deal to buy the 6.5 acres at a reduced price of $339,000.

Update September 7: If you've been skeptical of the need for the purchase, know that Charleston Mayor Joe Riley has penned a piece in defense of it; Take a read over here.

Update August 17: Just days after the Finance Committee﻿ said no thanks to the half-million dollar deal to "buffer" the Angel Oak park with 6.5 acres to the land, the full county council approved it.

Still, it hasn't ended debate about whether the land buy will really protect the tree —I'll point you to The Post and Courier﻿'s report.

The deal that would have bought 6.5 acres of land to "buffer" the historic Angel Oak became wrapped in criticism that too many of the land buys proposed with the county's half-cent sales tax﻿ would go to the "rich."

The Post and Courier﻿ has a solid rundown on what's up (read it here.)

Update March 22: The City of Charleston is planning to protect Angel Oak Park by acquiring 6.5 acres surrounding the city's 2-acre park, but the council's Real Estate Committee feels the $518,000 asking price is too high.

The Post and Courier reports that the council voted 3-2 to have a fresh appraisal of the land conducted, and took the land deal off tonight's council agenda.

For more on the continuing conservation efforts, click here.

First reporting: In the ongoing battle to develop land surround the centuries-old Angel Oak, a developer has filed a permit request to fill in several acres of wetlands which have recently come under federal protection.

You can read more about this latest turn in the debate over at The Post and Courier or watch about it in the video report at ABC News 4.

Below is the schematic of how the proposed development (in blue) would interact with the surrounding area (black) and the wetlands (A, B, C.) The Angel Oak itself in the box at bottom labeled "City of Charleston." You can learn more about the proposal in the full application.

To catch up on the saga check out our Angel Oak topic page.