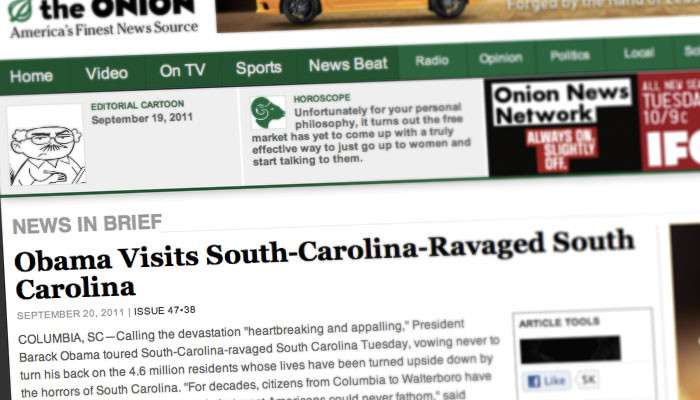 9:31 am on Wednesday September 21, 2011 | Posted by Ken Hawkins
Parody yet-not parody: Saving South Carolina from its own self

Image by The Onion The Onion opines on saving South Carolina from itself.

Things aren't sounding so great in South Carolina in the past week: We're coming off (thankfully inaccurate)﻿ comments from Gov. Nikki Haley that our workforce is drug-addicted and ignorant, and a once-again above 11% unemployment rate.

Such a scenario is all the motivation that The Onion need to do a brief with headline, "Obama Visits South-Carolina-Ravaged South Carolina﻿."

That parody article read, in part, "Calling the devastation 'heartbreaking and appalling,' President Barack Obama toured South-Carolina-ravaged South Carolina Tuesday, vowing never to turn his back on the 4.6 million residents whose lives have been turned upside down by the horrors of South Carolina. 'For decades, citizens from Columbia to Walterboro have suffered a kind of pain and anguish that most Americans could never fathom,' said Obama﻿."

Read it all over here.

But not that South Carolina is letting on that we're in a bad spot, a recent poll by Winthrop University﻿ of us in South Carolina, found that while 63% of Republicans and Republican leaners said the American economy was "very bad" (the overall U.S. has a better unemployment rate than S.C.), 48.2% of the same group said S.C.'s economy was better than the national economy.

For some lampooning on that angle, I'll point you to the Charleston City Paper﻿.

At this rate we'll have to change the state motto to "ignorance is bliss."