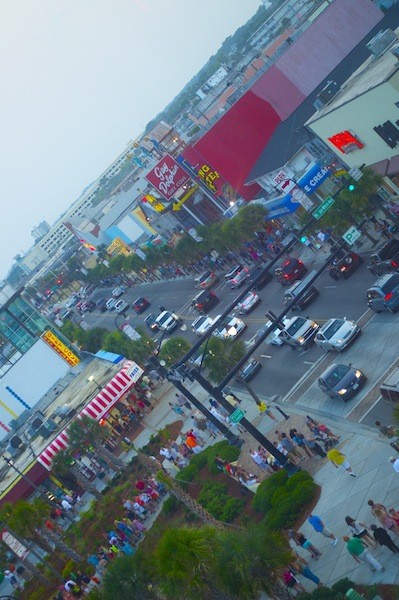 8:05 am on Tuesday June 14, 2011 | Posted by
Community Dialog: Can attractions like the SkyWheel help downtown recover?

It has been five years since Burroughs & Chapin﻿ decided to pull the plug on the Myrtle Beach Pavilion.

With the fear of the next season opening of the Hard Rock Park, less profits and a sense that all of what was going on around the beach was happening anywhere but downtown the Pavilion shuttered it's doors at the end of the 2006 season. Now, an empty lot sits in the heart of Myrtle Beach. A space where generations went when they were young and had raucous﻿ good time.

The Pavilion was home to rides, shows, night life, games and all manners﻿ of good times; but, that is all gone now. And five years on there is a sense that downtown might be on the full swing back to what it once was in terms of a destination of the areas visitors.

The boardwalk began the journey towards the new downtown and this season we have the SkyWheel that just opened along with a new restaurant. The small parks downtown where they are having a weekly carnival for kids is very nice, clean and safe feeling -however, walk a few blocks back to your car and you'll be hiding your camera.

I bring this all up thanks to a recent SCnow.com piece showcased the new SkyWheel and how it has brought the family back to downtown Myrtle Beach. Honestly, I didn't know they left downtown until the closing of the Pavilion. Mason Snyder of SCnow.com spoke with David Sebok ﻿of the Downtown Redevelopment Corporation﻿, Sebok claims that because of their efforts they project that 20% more visitors will come to Myrtle Beach and because the City plans on adding a new attraction of some sort a year for the foreseeable future that the 20% number will continue to grow.

I can see that. But really was tearing down the Pavilion what was needed for the reemergence of downtown? Or was it just a matter of money and a knee-jerk reaction to the threat of a big name amusement park? ﻿And, now that the city appears to be more involved with the attractions downtown will that be better for every business' bottom line?

Hop on over to SCnow.com to check out the article and watch the broadcast piece they ran last night.

We want to hear your take on the matter: did the Pavilion need to be torn down for this rejuvenation of downtown to take place?