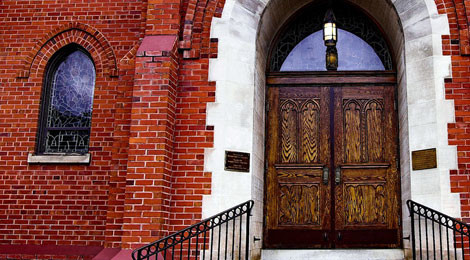 5:37 am on Tuesday November 18, 2008 | Posted by Ken Hawkins
Greenville Catholic church's call for repentance over Obama (now repudiated) is silly

Image by Flickr user Lucid NightmareImage by 20081113-st-marys.jpg The outside of St. Mary's Catholic Church in Greenville.

A Catholic church in downtown Greenville is calling on its parishioners to repent if they voted for Barack Obama. Essentially connecting the dots to say that a vote for Obama was a vote for abortion.

Father Newman of the Greenville church writes:
Voting for a pro-abortion politician when a plausible pro-life alternative exits constitutes material cooperation with intrinsic evil, and those Catholics who do so place themselves outside of the full communion of Christ’s Church and under the judgment of divine law. Persons in this condition should not receive Holy Communion until and unless they are reconciled to God in the Sacrament of Penance, lest they eat and drink their own condemnation.

While the Democrats are known for being "immoral" in their support of abortions, the Republican party has shown itself to be no less "immoral" in its support of the Iraq and Afghanistan wars which has lead to the deaths of thousand of innocents, many of whom were pregnant.

I don't doubt the seriousness of abortion, but this whole business of saying that voting for one party is a cause to repent is silly. To flatly call a whole side more immoral than another while only looking at one isolated issue is to act blindly. I would respect the stance more if they had said repentance was necessary based on the relative difference in morality between the two candidates.

But, I suppose it all depends on what measuring stick you want to use.

Go read all about it at GreenvilleOnline.com, or read Father Newman's whole statement.

Update November 14: And, there we have it. The Monsignor of of South Carolina Martin T. Laughlin has effectively come out opposing Father Newman's broad remarks, saying in a statement:
This past week, the Catholic Church’s clear, moral teaching on the evil of abortion has been pulled into the partisan political arena. The recent comments of Father Jay Scott Newman, pastor of St. Mary’s Catholic Church in Greenville, S.C., have diverted the focus from the Church’s clear position against abortion. As Administrator of the Diocese of Charleston, let me state with clarity that Father Newman’s statements do not adequately reflect the Catholic Church’s teachings.

Go read his whole statement, or watch his video recording.

Update November 18: In what appears to be the final word on the matter, Father Newman addressed his congregation on Sunday and did say he spoke in error, but only that he should have structured his argument better.

Go read about it at The Greenville News.

Given the backlash he's experienced, I doubt we'll see that more thorought argument. But I would welcome it.