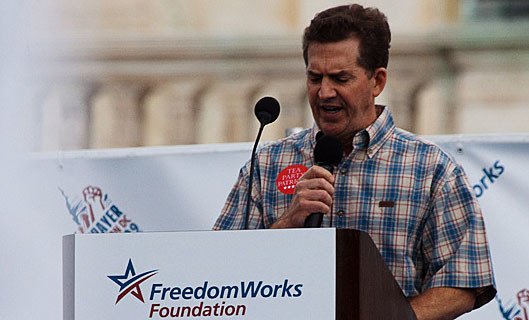 2:15 am on Tuesday September 29, 2009 | Posted by Ken Hawkins
You should care: Jim DeMint takes stance to block Net-neutrality

I'll be frank the concept of Net-neutrality can be intimidating to non-geeks, but you should care.

Without it your favorite independent Web sites could slow down to a paltry speed unless their operators dole out cash for premium connections to your computer.

In essence -- the thinking goes -- not only would you have to pay to connect to Web sites, but Web sites would pay for fast access to you. Go one step further, and the thought is the big corporations could squeeze out the little guys.

This video provides a good orientation to the topic.

And our U.S. Sen. Jim DeMint has recently co-sponsored legislation that would block the FCC telling Internet providers to staying out of the content flowing over Internet pipes under their control.

If you're feeling passionate about it, you should let DeMint know what you think:

Often the argument against any sort of mandated neutrality rests on the concept that the net is already neutral, and so there's no point fixing what's not broke.

Some logic in that thinking for sure. But with the rise of the iPhone folks have been begun crying foul as AT&T and Apple have blocked some network uses.

It's an apparent breach of the Net-neutrality de facto standard, and now the debate is heating back up.

Check out this Washington Post piece for more on that angle.

It's also worth noting that the FCC has not yet fully decided it wants to outright mandate Net-neutrality.